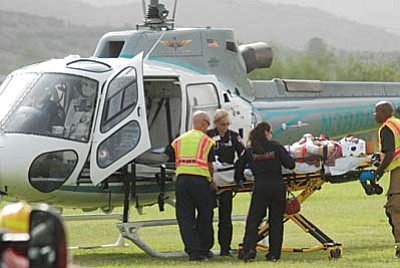 CAMP VERDE -- Three vehicles, including two pickups and a sedan, collided in a T-bone style wreck Friday morning. The accident at SR 260 and West Salt Mine Road near Ernie's Smoke Shop. The wreck was dispatched to emergency crews about 8:30 a.m.

There was only a single occupant in each of the vehicles.

While Harbeson was air lifted, Stephenson and Holliday were both transported to Verde Valley Medical Center by ground ambulance for medical treatment.

Two of the drivers wore seatbelts, but it is unclear if the seatbelt was in use by the third diver.

Barbara Rice of the Camp Verde Fire District says Holliday in the Ford Bronco SUV was actually stopped at the intersection when the black GMC pickup struck the small silver sedan crossing Salt Mine Road.