A day of two's 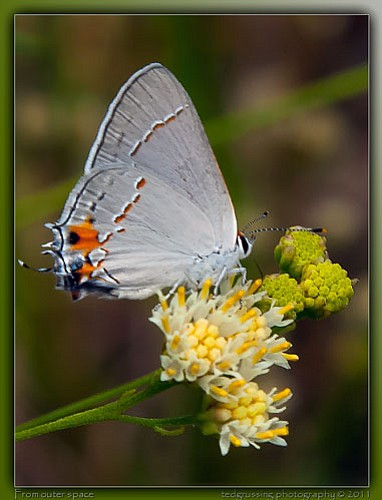 ... nice to sit down after a long day and sort through and balance things out. It did seem to be a day of twos as first thing this morning I took the 95 van into Anderson's Automotive in West Sedona to have it serviced and get an opinion on whether or not they felt it would make the respite trip I am planning for later this fall; although Warren has said it died several years ago, the opinion is that it will make it. Whilst they were working their magic on the van I took a long walk and got the first photo tonight of a very small butterfly I have not seen before; its marquis shaped eyes have an alien type look to them as do the beautiful black and white antennas' with orange tips. Then it was home, and bring the new van in for service and another long walk, but nothing special found to shoot although I did and have deleted them.

After I brought the new van home it was time for Corky and I to head back into town for two dental appointments at Sedona Dental Arts owned and operated by the good Dr. Bill and family and both of us will need a little follow up work. As always a very nice experience with great dentistry and a competent and friendly staff.

It was a little late when we left the dental offices so Corky and I headed up to the airport. I decided to take a late flight as it looked like there would be some great light on the rocks and also the clouds looked like they were still working ... so some good shots and some good soaring. I hooked a good thermal at about 7,000', turned the engine off and even though it was nearly 6P, I averaged over 400ft/min to 10,000'. The light was getting great on the rocks so got a bunch of shots as I slowly lost altitude and set up for a landing on R3, but as I turned base leg for R3 the sun broke through a cloud bank over the Prescott Valley and the late sun bathed the rocks in a deep rich color. I aborted the landing and took some low level shots before heading back to land. In this shot the lower left is in shadow and you can see Oak Creek there and Red Rock Crossing, Cathedral Rock is prominent right and above center in the photo and the rocks are casting their long shadows over the valleys and the view is looking to the north east.

The new restaurant is now open on Airport Mesa and Corky and I decided to try it out. The food is very good, the owner and all the help very friendly and the prices moderate. Met a couple of friends and enjoyed the visit and then it was home to ut a wrap on the day. Truly one of the exceptional days that are just waiting to be enjoyed ... most days are like that if you want them to be.

Take care and enjoy today as another week is nearing a close. We are doubly blessed.

Looking forward ...
Thanks ...
Today
I wish ...
No pain
Event Calendar