EDITORIAL: A day of reverence 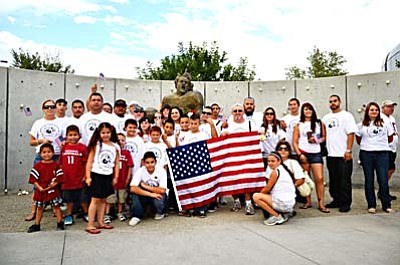 <b>The Golden Cobra crew</b> stands for a group picture next to the Pat Tillman statue outside University of Phoenix stadium on Sept. 11, 2011. VVN/Sean Morris

I don't have the same emotional response to football-field-sized American flags that most people do. I don't like chanting USA, and I'm not into the pledge of allegiance or the national anthem.

I'm proud to be American, but I'm introverted when it comes to displaying my patriotism. I know I'm different.

I guess I want to feel like I arrived at my love for this country through contemplation rather than indoctrination, but on the tenth anniversary of 9/11 I felt like I understood the motivation to display widely perceived symbols of patriotism.

I got to attend the Cardinals game with Golden Cobra Center of Fitness on 9/11, and everywhere I went people were wearing Pat Tillman jerseys and American flags draped around their bodies.

Plenty of homemade signs that said, "We will never forget," or "This one is for Pat Tillman," let everybody know the game between the Cardinals and the Panthers was secondary to our day of remembrance.

Tiny American flags were handed out to every ticket holder, and as the giant American flag was unrolled onto the field before the national anthem the crowd started chanting USA!

I felt the unifying power and it reminded me of how important sports were to this country in the days following the attacks.

Sports helped the nation get back to normal because it helped us remember the American spirit.

It's the lessons in sports that make them valuable off the field of play: it's not over 'till it's over; it's not how you start it's how you finish; hard work is its own reward; keep your head up; keep your head in the game; be a team player, etc.

America needed something to grab onto to help heal after the attacks, but America needs that now because we face different challenges.

We shouldn't need a tragedy to realize the importance of togetherness.

The "Together we stand," mantra held so much meaning back then because it was true. The entire nation felt the need to bring back unity.

When you see someone wearing your colors, you're a lot more likely to feel a connection with them--you might even strike up a conversation.

America is great because we are good to each other, and if we ever lose that we will lose our greatness.

Attempting to understand one another is a gesture of respect, and that, not love, is really all you need.

My outward appearance didn't give any hints of nationalism on 9/11, but inwardly I felt reverent and thankful to be a part of something bigger.

I also gained hope for America, not because of anything the president said or didn't say, but because together we really can accomplish anything.

Letter: Patriotism runs much deeper that your allegiaince, or lack of, to the president
How would Pat Tillman react to anthem controversy? Friend Staat has an idea
Guest Editorial: Betsy Ross flag is about Revolution, not slavery
Stand or stay away: Reaction mixed to NFL’s new national anthem policy
Flags in demand in Verde Valley<br>