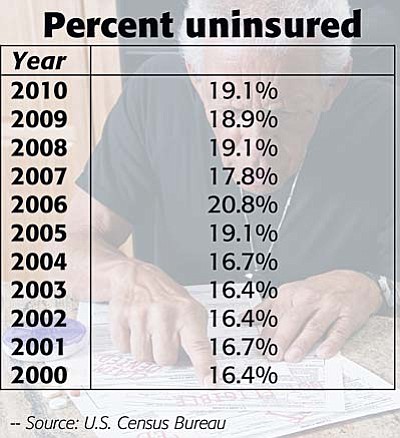 PHOENIX -- Fewer Arizonans were living in poverty last year than the year before that, the U.S. Census Bureau reports.

But it may not be that Arizonans are, on average, doing better than the rest of the country. Instead, it may simply be that those who were dragging the numbers down simply packed up and left.

Or the numbers may just be wrong.

The figures Tuesday from the U.S. Census Bureau show more than 1.2 million Arizonans in household below the federal poverty level. That is currently defined as $22,314 for a family of four.

The report also shows that Arizona, which had the second highest poverty rate in the nation two years ago, now has dropped back a bit, behind Mississippi, Louisiana and Georgia, and is tied with New Mexico.

Economist Dan Anderson of the state Board of Regents said one possible explanation is that a lot of Arizonans who were at the bottom of the income scale in 2009 and did not have opportunities for employment simply packed up and went elsewhere.

"The average rises because you lose people at the bottom of the distribution,' he said. Anderson said many of these people may simply be going back to live with families in the Midwest or on the East Coast.

Anderson said it would take a deeper analysis to determine what else is going on.

In fact, a separate Census Bureau report says that, nationally, more families are "doubling up.'

But Tom Rex, an economist at the W.P. Carey School of Business at Arizona State University, said he does not need to pore through the numbers to determine the reasons for the trends the Census Bureau is reporting. He called the agency's numbers "useless.'

Rex said the problem is that, when you get down to the state level, the margin of error gets very large. He said that 18.6 percent poverty level cited by the agency could be as low as 16 percent -- or as high as 21.2 percent.

And Rex said that, based on other data he monitors, it is more likely that the state's poverty rate actually increased and median income actually dropped.

Rex is not the only one questioning the data. Dana Naimark, president of the Children's Action Alliance, said she doubts the accuracy of any one-year change given the way the Census Bureau gets its data.

In a separate survey, the Census Bureau reports that the percentage of Arizonans without health insurance remained relatively steady, at 19.1 percent. That compares with 16.3 percent nationally.

But that disparity could soon widen.

One reason the number of uninsured here is not higher is that Arizona has a more inclusive Medicaid program than what is offered in other states.

The Arizona Health Care Cost Containment System, the state's Medicaid program, has until this past July provided free care for anyone living in a family whose income is below the federal poverty level.

As a result, 18.3 percent of Arizonans received care last year through AHCCCS. The nationwide figure for Medicaid recipients is less than 15 percent.

All that, however, could change.

As of July, the state is no longer enrolling single adults and some other parents into AHCCCS. The move was ordered by Gov. Jan Brewer in response to a legislative mandate to cut health care costs.

That action has been challenged in court as violating a 2000 voter-approved mandate to provide care for all below the federal poverty level. At this point, though, no court has overturned the policy.