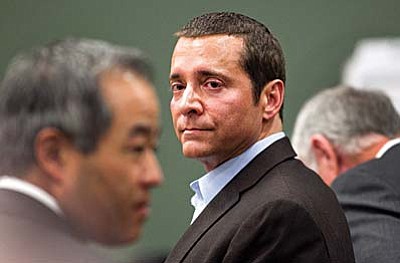 Ray, 53, was convicted in late June on three counts of negligent homicide in the deaths of Kirby Brown, James Shore and Liz Neuman after an October 2009 sweat lodge ceremony at a retreat center near Sedona. He faces the possibility of as long as nine years in prison.

Jurors believed that Ray, who led the ceremony as part of his Spiritual Warrior seminar, was responsible for the heat-induced deaths, because he was in charge of the ceremony and should have recognized the dangers the 50-plus participants were facing in the hot, steam-filled and virtually airtight structure at the Angel Valley Spiritual Retreat Center. They rejected as unbelievable the defense contention that organophosphate-based pesticides in the sweat lodge could have contributed to the deaths.

Ray's attorneys filed a motion for a new trial July 13, alleging multiple instances of prosecutorial misconduct including disclosure violations, one of which led to a near mistrial in April. Darrow said he may or may not write an order outlining his reasons for denying the motion.

Wednesday's hearing was set as a scheduling conference for a weeklong pre-sentence hearing that is to take place next week prior to sentencing on Sept. 26. Ray was not in court, and his attorneys appeared telephonically, as did Yavapai County Attorney Sheila Polk.

During next week's proceedings, the defense plans to present as many as 19 witnesses on Ray's behalf. The state, Polk said, will have seven witnesses and 11 representatives or friends of the victims who wish to address the court prior to sentencing.

Darrow, who has moved his court to Prescott from Camp Verde where the four-month trial took place, had earlier agreed to allow the state to have equal time during the pre-sentence hearing - a decision that Kelly said Wednesday was inappropriate.

"I would remind counsel that the aggravation hearing has already been completed," he said, referring to the post-conviction proceeding in which jurors found that Ray had caused severe emotional harm to the victims' families, thus aggravating his potential prison sentence to three years per count. Probation is also a sentencing option.

Darrow said he planned for testimony in next week's hearings to be completed in time for the attorneys to discuss remaining legal matters, including one related to sentencing.

Emphasizing that he has not made a decision on Ray's sentence, he said, "I want the parties prepared to address the concept of staying (delaying) the incarceration component" should he impose jail or prison time.

Ray has been free on bond since shortly after his February 2010 indictment and arrest.