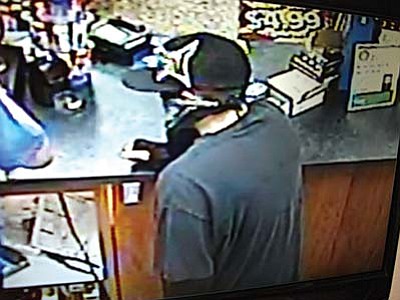 COTTONWOOD -- Cottonwood Police have arrested a 19-year-old Cottonwood man, wanted in the armed robbery of the Shell gas station across from Walmart and Carl's Jr. on State Route 260.

Joshua Wayne Curtis of Cottonwood is charged with one count of armed robbery. The heist occurred Friday, Sept. 9, just after 1 in the morning.

Cottonwood Police were dispatched to the gas station after the store clerk reported he was robbed at knife point by a young man. The suspect was described as a white man in his 20s, about 6 feet tall, weighing 180 pounds.

Surveillance video shows the suspect wearing a black long sleeve shirt with a gray T-shirt over the top, a black baseball cap, with a black bandanna with a white design covering his face, black pants and black and white tennis shoes. An undisclosed amount of cash was taken along with several packs of cigarettes. The suspect fled after the theft. The clerk was not injured.

Last week, Cottonwood Police got information from the Yavapai County Sheriff's Office Special Crimes unit that identified Joshua Wayne Curtis in connection to this robbery. Detectives interviewed Curtis at the Yavapai County Jail while he was in custody on a separate charge. Police have recovered several pieces of evidence in the case.