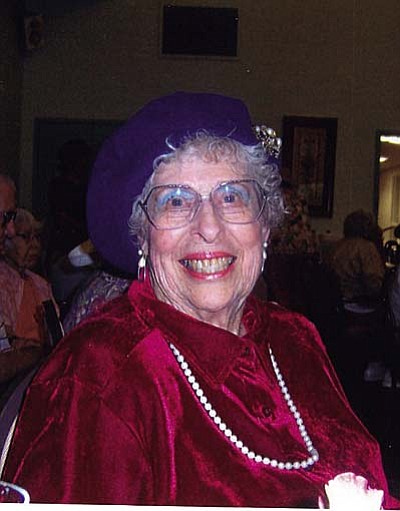 Verna Lucille Welsh 93 of Cottonwood and Winslow AZ born in Newton, Kansas, December 20,1917 passed away peacefully on September 17, 2011 surrounded by her loving family as she made the transition from this life to her heavenly life to be with her Lord and Savior Jesus Christ.

Her love of God and Jesus Christ was always first in her daily living and she always had a positive attitude and a great smile. An awesome mother, grandmother, great grandmother and friend to everyone, she will be greatly missed.

Over the years she was very active in the First Christian Church, was president of PTA, worked as a waitress for the Falcon Restaurant and was Secretary-Manager for the Winslow Chamber of Commerce. In October of 2009 Verna decided to move to Cottonwood Village and was thrilled with her apartment and getting to meet new friend, enjoying all of the activities offered at the Village. She always said, “ This was her Big Home.” ( Saying this because her home in Winslow was quit small)

A memorial service will be held at 2PM on September 27 at Cottonwood Village, 201 E. Mingus Ave, Cottonwood, Arizona. In lieu of flowers, contributions can be made to Northern Arizona Hospice, 203 South Candy Lane, Suite 10-A, Cottonwood, AZ 86326, or a charity of your choice.

Condolences may be left for the family at www.norvelowensmortuary.com