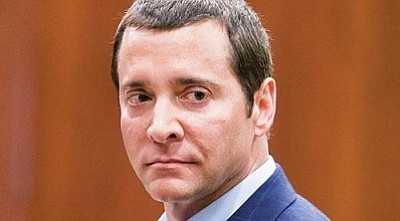 PRESCOTT - Citing the rights of James Arthur Ray to have the counsel of his choice represent him throughout his case, Judge Warren Darrow on Friday canceled presentence hearings that were to begin this coming week.

Ray, 53, faces a sentence ranging from probation to nine years in prison after his June conviction on three counts of negligent homicide in the October 2009 deaths of Kirby Brown, James Shore and Liz Neuman. The sentencing proceedings, originally set to begin on Sept. 19, were first postponed after his local attorney, Tom Kelly, required treatment for a heart condition. Darrow's Friday order, in response to a defense request to continue, calls for a telephonic scheduling conference on Monday.

Family members of the victims in the case, as well as Yavapai County Attorney Sheila Polk, have argued that Ray's sentencing should have been completed within 60 days of June 30, when the guilt phase of the trial ended. But Darrow noted that factors such as the victims' families' request for restitution, which the court received only this week, are valid reasons for continuance.