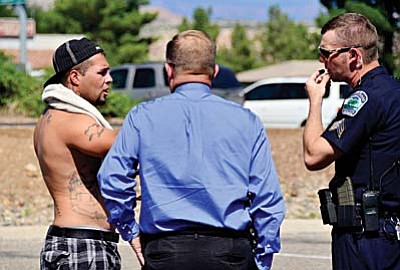 COTTONWOOD -- The 19-year-old who was stabbed and killed Tuesday in a confrontation with another 19-year-old has been identified as Jake Palmer of Clarkdale.

Officers first became aware of the stabbing when a motorist told a Cottonwood police officer by telephone that he was taking a wounded man to the hospital. Police and fire crews met up with the young men at the Food City parking lot. The wounded man was loaded into an ambulance, but died after reaching Verde Valley Medical Center.

Yavapai Sheriffs Spokesman Dwight D'Evelyn says a man detained, but not yet charged, is 19-year-old Mason Anderson of Cornville. Anderson said he and Palmer knew each other and he admitted his involvement in the confrontation

During an interview with police, Anderson claimed that he acted in self-defense in response to the fight with Palmer and two other men with Palmer at the time.

The stabbing occurred in the street at Pipe Creek Drive and Grand View Drive in Verde Village. Anderson phoned police and was interviewed by a sheriff's deputy at SR 260 and Western Drive. That is where police also recovered a knife.

Detectives continued their investigation into the homicide throughout the evening Tuesday and Wednesday and it remains active.

If anyone has additional information regarding this incident, please contact YCSO at 928-771-3260 or report information anonymously to Yavapai Silent Witness at 1800-932-3232.

COTTONWOOD -- Cottonwood Police converged on a faded blue compact Toyota in the Food City parking lot in Cottonwood Tuesday afternoon. It was the scene of what was being dispatched as a possible homicide. The man was rushed to the hospital and has since died, according to Yavapai Sheriff's Spokesman Dwight D'Evelyn.

Cottonwood Police Chief Jody Fanning told the Verde Independent that it appears some kind of assault, "occurred in the county" and a friend was driving the wounded man to the hospital and pulled into the parking lot.

In the parking lot, Fanning could not confirm if the man, reportedly age 19, had died but the police chief said he was seriously wounded and may not make it.

A small pool of blood and blood on a denim jacket was on the back floor of the car.

A sheriff's deputy arrived to pick up the investigation based on that information and the vehicle was circled with police tape.

D'Evelyn now says that the assault occurred in the street in the intersection of Pipe Creek and Grand View in Verde Village.

D'Evelyn reported that a man of a similar age is detained for questioning after contacting the SO and saying he had met with the victim a few minutes before, but no charges have been filed.

"We have also recovered the weapon," said D'Evelyn. A knife was recovered near the intersection of Western and SR 260.