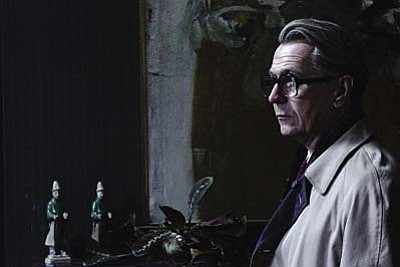 Here we have one of those timeless, immortal stories that come from a novel, become a hugely successful television miniseries (1979), a radio drama and now a highly acclaimed movie. The challenge is to find anyone who can unwind all the twists and turns in the story.

Tinker Tailor Soldier Spy tells us (correctly I'm sure) that real life spying and intelligence gathering is not what we see in films like the Bourne series or a James Bond thriller. There aren't continuous car chases and martial arts bouts on rooftops. Most of the action takes place in quiet corners where pieces of paper may be exchanged or where orders are quietly given to operatives. The critical thing is for a spy to appear as an ordinary person. It isn't a celebrity thing.

Tinker Tailor Soldier Spy depicts this context throughout. The time is in the depths of the Cold War, some 20 years or so after World War II. Most of the movie takes place in dimly lighted apartments, large barely furnished op centers, corner tables in coffee shops and secure conference rooms. John LeCarré, the book's author was involved in the British intelligence service (MI-6, colloquially called 'The Circus') so there is a good deal of plausibility in his stories.

The head of The Circus is called Control (played by John Hurt). His top staff consists of a handful of specialists in various aspects of anti-Soviet activity. George Smiley (Gary Oldman) is his number one man. At the start of Tinker Tailor Soldier Spy we see a mission in Hungary where a second level Circus operative is supposed to meet a possible Russian defector. The mission turns deadly. Control and Smiley are forced out of the service - in retirement.

It becomes obvious that one of the top staff members is a double agent, a mole. That's how the Russians knew about the Hungary mission. Smiley is approached by a high government official and given the secret assignment of finding the mole. He must operate with no official status and without the support of The Circus.

Smiley uses all the contacts and skills he developed over his long tenure in The Circus, going back to World War II. Step by step, piece by piece, he unravels the tangle of secrecy, personal agendas, betrayals, etc. And there is so much of that tangle that it is very hard to follow the tortuous plot. But the director, Tomas Alfredson, keeps us riveted to the film, giving us hope that it will all become clear soon, or eventually. Some of it does. The identity of the mole is never apparent until the end.

Flashbacks play a big part in Tinker Tailor Soldier Spy and they are helpful explaining why something is happening in the present. Tinker Tailor Soldier Spy is nicely photographed with background scenes of London, Paris and bleak interiors. Smiley is a very stoic man, as he has been trained to be. Gary Oldman barely says a word for the first 20 minutes of Tinker Tailor Soldier Spy. The secret assignment arouses his passion for the clandestine activity that has been his life's work. Through it all he's calm, reserved and under complete emotional control. The performance by Oldman is quite convincing and he was nominated for a Best Actor Oscar. Other principal players include Colin Firth (The King's Speech) and Benedict Cumberbatch (of the TV series, "Sherlock").