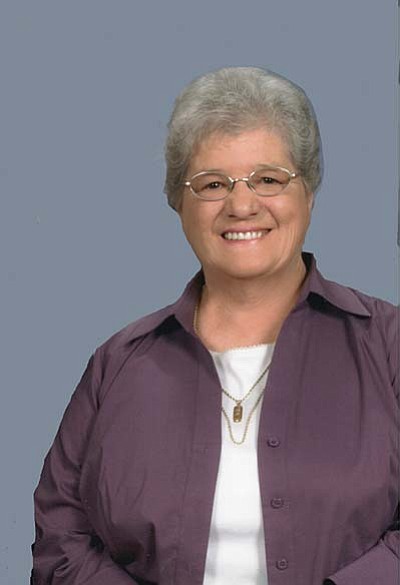 Gladys M. Archey Hajicek, 72, of 1939 Quail Run Road, Cottonwood, AZ died at her home on April 16 after a long hard battle with cancer.

Leah Hooper Archey, Gladys lived her school years in Pittsfield graduating from St. Joseph High in 1959 and the College of Our Lady of the Elms in 1961 after which she continued on to get her Master’s Degree at North Adams State now known as MCLA. While a senior at the Elms she was elected to the Who’s Who Society of American Universities and Colleges.

Following seven years of teaching in the Pittsfield schools her career and life took a new direction when she joined the US Dept. of Defense Overseas School Program. Her first assignment was in the Philippines but she did most of her teaching and administrating in various parts of Germany including Wiesbaden then to Stuttgart where she first became an administrator followed by a post in Zweibruken as the Asst. Principal of the High School.

It was there that she met Frank who became her devoted husband in 1980. Heidelberg was her final placement where she spent fifteen years until her retirment in 1994. In 2002, as a surprise, she and her Principal were given the Government Coining Medal to honor them for all they had done during their years of service. This award was not usually given to civilians. Retirement took them to Arizona where they have resided ever since.

During their years in Germany Gladys and her husband traveled extensively to such countries as England, Italy, France, Greece, Russia and numerous other countries and continents where they grew to know the customs and met many wonderful people with whom they have remained friends all these years.

In addition to her husband and mother, Mrs. Hajicek is survived by four sisters and three brothers; Regina Decker and husband, Ned, of Pittsfield; Patricia Archey of Worcester; Jeanne Archey of Arizona; Joan Monterosso of Pittsfield; Edward E. Archey, Jr. and his wife, Donna of Michigan; Lawrence M. Archey and wife, Susan, of Springfield, MA and Richard J. Archey of Pittsfield.

She also leaves several nieces and nephews with whom she had very loving and fun relationships and by whom she will be greatly missed. She became an integral part of her husband’s family and leaves her brother-in-law Ken and wife, Avis of Park River, N.Dakota; her sister-in-law Peggy Johnson of Hamilton, ND; a niece, Pam and nephew Mike and his wife, Marni of Fargo, ND.

She will also be sadly missed by numerous caring friends and neighbors.

Visitation will be from 5-7 PM on Sunday, April 22 at the Westcott Funeral Home. The Recitation of the Holy Rosary will be at 6 PM.

A Funeral Mass will be held on Monday, April 23 at the Immaculate Conception Catholic Church at 11 AM.

Immediately following the Mass a reception for all will be held in the Church Hall. Following cremation, Gladys will be inurned at All Souls Cemetery at a time and day to be announced.