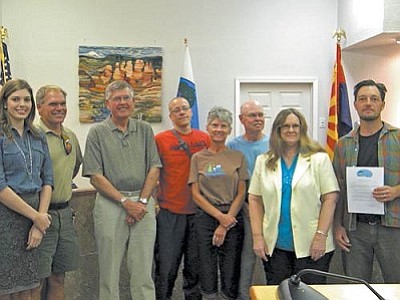 The Verde Valley Cyclists Coalition joined the Cottonwood Council this week in proclaiming May as Bike Month and May 14-18 as Bike to Work Week in Cottonwood. The Proclamation urges "all residents, schools, city departments, and civic groups to support bicycling; and for motorists, pedestrians and bicyclists to work together to share our streets, roads and trails."

Cyclists and the city have been working to make Cottonwood a League of American Bicyclists recognized Bicycle-Friendly City. In 2011, Cottonwood was rated an Honorable Mention and the advocates hopes to achieve the Bronze category in 2012.

Cottonwood recently expanded the number of "sharrows' on street pavement to increase awareness that motorists and cyclists are sharing the road.

During an update of its Strategic Planning, Mayor Diane Joens noted that the city has talked about increasing its bike racks at public buildings for several years but has not yet spent the money.