A study in white 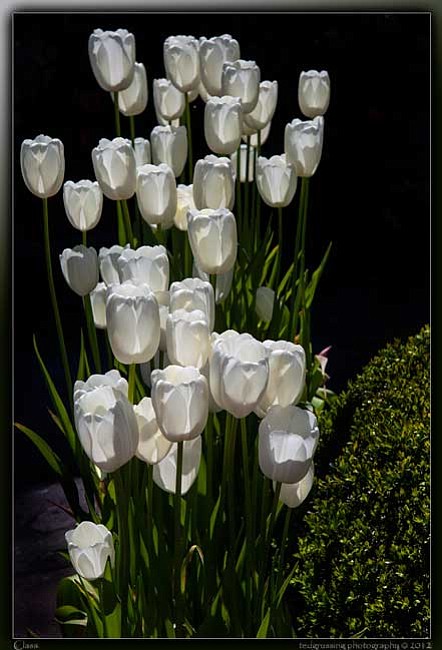 ¡K or so it would seem. I returned from a most wonderful respite break earlier today and uploaded all the photos this evening. First a huge thank you to our daughter Sus, her husband Ted and our granddaughter Annika for having me as a house guest and lining up so many fun places to visit and things to do, we are blessed and the week was packed with beauty at every turn ¡K and a treat to one of the best baseball games I have seen ¡K Giants and Phillies and each starting threw less than 100 pitches through the first nine innings, pure fun and what a great stadium the AT&T Giants stadium is.

There were a lot of photos I wanted to get and I got most of them. Sus had set up a shoot for me at Filoli Gardens just south of Crystal Springs Reservoir. This is one of those beautiful mansions out of the late 19th century California era. Originally built by William Bourn and after the deaths of he and his wife in 1936 the estate was purchased by the Roth¡¦s. You can read the complete history and learn more about this incredible place at: http://filoli.org/explore-filoli/the-house/history.html I love to shoot flowers and after spending part of the day exploring the grounds, I had the opportunity to do an artist/photographer shoot after the normal hours and we were left with only a handful of photographers and artists roaming the grounds. The lighting was special too and , well, take a look at the photo titled ¡§Class¡-, and it will give you a little idea of what I spent several hours shooting. No embarrassment at laying down on the pathways to shoot up at flowers that were backlit by the sun or peering down into the depths of blooms. Many more to follow, but this is a departure from my normal inclination to spend most of my time inside the bloom exploring worlds as yet unknown. Pure joy!!!

Since I am doing white tonight the second photo is of a white egret which I shot at Pescadero State Beach about thirty miles south of Half Moon Bay; he was feasting on fresh seafood in the tide pools as the tide was coming in. Elegance of creation at work.

So many images I want to get out, but still sorting; down to around 750 for the week and not many I want to delete.

It is wonderful being home and being able to share all the joy I see every day as I continue my favorite exercise of breathing ¡K the trip to Point Reyes and the lighthouse and much more to come. Cliffs that drop thousands of feet into a wild ocean frothing at the shore and narrow winding roads that run along them. Sus did a great job driving and we returned with images that inspire the soul.

Have a wonderful day and a wonderful week. We are blessed and a major part of the blessing is the ability and choice to share the beauty we find in life.

Be well, and share a smile or a silly grin with someone today ¡K have I used the word wonderful in this? º