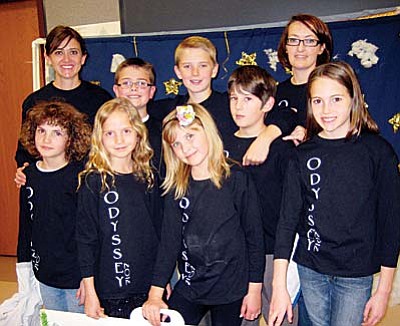 The Odyssey of the Mind team from Clarkdale-Jerome School will be off to Ames, Iowa in May to compete in the World Finals. The team took first place in regional competition and second in state competition. Front Row, (left to right) is Anya Kline, Aubrey Boulet, Olivia Gordon and Olivia Grasso. Back row: Nicole Gordon, (coach), Dallin Gordon, Colton Sorensen, Ethen Rebenschied and (coach) Janae Gordon. Courtesy Photo

Odyssey of the Mind is an international program for students from kindergarten through college. Teams from throughout the United States and about 25 other countries compete each year in the competition.

There are four grade-level divisions that compete all the way to the World Finals and another primary division that competes up to regional competition. The teams select from a group of five problem categories to compete in.

"Our team chose Odyssey Angels as their problem," Janae said. "It is more of a theatrical performance to show how these angels could help solve a problem in their community."

The Clarkdale team picked an environmental awareness theme of ocean and water.

"It's all team created," Janae explained. "Coaches cannot give ideas. We're there just to provide structure."

Clarkdale-Jerome Superintendent Kathleen Fleenor said it is great what this team has accomplished so far.

"They are a great group of kids," she said. "When they compete at the World Finals they are exposed to other cultures."

"We get only $1,000 from Arizona for gifted education," Fleenor said. "We've never been able to afford that."

Along with the honor of competing in the World Finals, the seven kids from Clarkdale-Jerome School also have the task of raising about $11,000 to pay for the trip.

"We don't get any school funding," Janae said. "We try to get tax credits for Odyssey of the Mind."

Anyone who wants to donate through the tax credit system will be allowed to claim the credit on their 2012 state tax return. Checks should be made out to Clarkdale-Jerome School but designated for Odyssey of the Mind.

The kids are also selling donuts and raffle tickets.

A Krispy Kreme sale will be held May 11 at the school, and a $10 raffle ticket could win up to eight people four nights and five days in Colorado, Arizona or Las Vegas at a time-share.