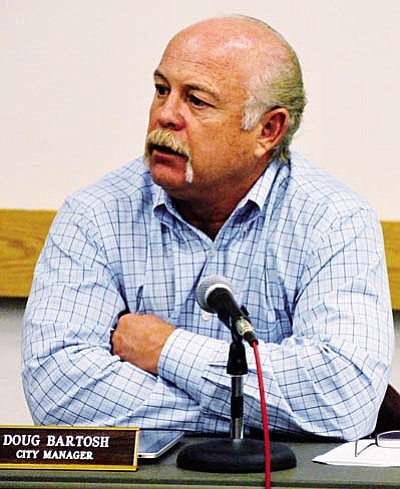 There has been considerable talk over the past year about a marriage of administrative services between the Cottonwood-Oak Creek and Mingus Union school districts.

Already, the two districts have jointly hired a shared director of special education. Equally impressive is the bridge recently gapped between the Cottonwood-Oak Creek School District and City of Cottonwood to jointly hire a Youth Program Coordinator-PE teacher.

Neither the city nor the school district could financially justify funding a full-time position for a youth coordinator or a PE teacher. Together, they’ve made it happen. The city will hire the position as a full-time employee with full benefits. The school district will be billed for the portion of time the employee spends working as a PE teacher.

Interestingly, the school district and city made this happen in short order, without the need to hire an outside consultant to advise them on how to do it.

Which begs the question: Why can’t Cottonwood-Oak Creek and Mingus Union do the same thing and get their shared services agreement finalized?

Cottonwood-Oak Creek Superintendent Barb U’Ren describes the city-school pact as “a win-win for the city, the district and the community we serve.”

How about a “win-win” for all involved on a Cottonwood-Oak Creek-Mingus Union marriage?

Speaking of the Cottonwood-Oak Creek and Mingus Union shared services plan, if the two districts really are committed to shared costs and a shared administration, don’t you think Mingus would first consult with C-OC about this plan to put a medical clinic on its campus?

The same, of course, can be asked of Cottonwood-Oak Creek concerning the hiring of a $45,000-a-year public relations firm.

If these two districts genuinely are committed to coming together, it’s best they not go in different directions.

It would be a shame to see the effort to merge the administrations of these two districts go down the tubes because one or the other district went off in a direction the other does not want to follow.

The timing could not have been more perfect for Cottonwood City Manager Doug Bartosh to win a 2012 Gabe Zimmerman Public Service Award.

At the same time it was announced that Bartosh was one of three statewide winners for the Gabe Zimmerman award, Verde Valley Leadership was preparing to graduate its Class VI participants.

And just as the model for Verde Valley Leadership instruction is based on servant leadership, so too was the emphasis of why Bartosh received his award.

It states that Bartosh “epitomizes the ideal servant-leader who is content to stay in the background” and “is a model of how to engage citizens in solutions to community problems.”

Bartosh’s servant leadership example is the perfect model for VVL students to emulate.

If cleaning up roadside trash was an Olympic event, I’d bet on Gary Chamberlain to win the gold medal.

This week I received an email from Gary about his upcoming Aug. 18 “Operation Leapfrog” trash cleaning event. It was labeled “121st Story.” The guy is thorough, persistent, diligent, determined and enduring.

Operation Leapfrog is a completely volunteer effort, and not to be confused with Chamberlain’s entrepreneurial “Folksville” efforts. See, when he’s not volunteering to pick up roadside trash, Gary is doing it for pay as a sole proprietorship at $10 a bag maximum. He has a base of more than 100 “customers” from all over the Verde Valley, Prescott and Flagstaff.

Interestingly, for a guy who never misses the chance to see his name in the newspaper, Gary becomes surprisingly closed-mouthed when asked about the specifics of the for-profit side of his trash-cleaning efforts.

When pressed, he did confide that he utilizes a private bookkeeping company, P&L Income, but refused to provide the firm’s address or phone number. Likewise, he says an unnamed CPA will do an annual audit of Folksville USA.

Keep up the good work, Gary. You may never receive that gold medal you deserve, but you’ve surely struck gold.

Commentary: It takes a Village to clean up after slobs
My Turn: Are you part of the problem or solution?
Letter: Is the Cornville Community Association Cornville&#8217;s voice?
2011 Verde Pride Awards: Educator of the Year: Oak Creek&#8217;s Donnie Shanks
Letter: Let&#8217;s hear the logic behind this decision from city council