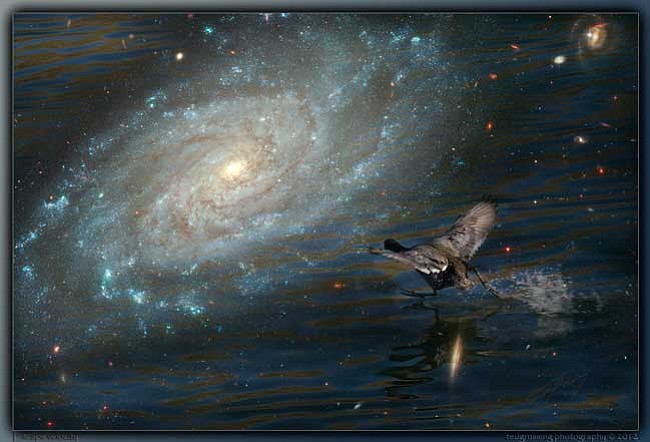 ... to achieve escape velocity ... with the vastness of the universe ahead, this coot is attempting to achieve the velocity necessary to achieve flight and then a trip out into another galaxy which lies before him. In reality he does attain flight but is mired in the reality of being a passenger of planet earth, the third planet out from our star the sun which is our personal starship taking us through the our galaxy the Milky Way, which in turn is hurtling through the vastness of the universe every single second of our lives. It is a starship with unbelievable creature comforts and illusions ... that we are not in motion ... that there is a stability and permanence ... that we are safe ... illusions all. Myths abound on the starship that we have power and/or control over our destiny and that of earth, but there is no such power. We are alone and choose to forget our place in the universe ... but some like Q, the Hawk and now the Coot know what is out there and their lives are changed forever.

At 3:00 this morning I abandoned my quest for another of the interstellar composites after finishing one with a bobcat, one with a squirrel ... they ended up in the bit bucket and I in bed to get the requisite four hours of sleep. Refreshed and with new thoughts and perspectives I put this one together this morning and do like it. Probably would have liked the other two also, but they are gone. Dean Koontz is one of our favorite authors and his Odd Thomas series a brilliant and light story; except for the fifth one which we attempted to listen to last night. It was simply awful and after two hours we skipped eight hours to the last thirty minutes and it too was awful; he did the same thing with the Frankenstein series, the first two were brilliant, the third and fourth progressively dark and muddled and the fifth so bad that we quit after a little more than an hour. It is with that mindset I went into the quiet hours last night ... it was a good day though and I got an hour and twenty minute soaring flight in yesterday late afternoon; total engine time was two minutes on takeoff and that was it, We went up to Flagstaff, back down the Verde Valley and an abbreviated pattern and landing at Sedona ... only worked two thermals and was too high to get decent photos because of all the water vapor in the atmosphere. Beautiful time and nearly a thirty mile final glide coming home.

The day is well underway and what a beautiful one it is; finally picked three tomatoes from my plants as they were not turning red after several weeks on the vine probably because they were shaded from the sun with all the foliage. Hopefully they will be as good as I anticipate.