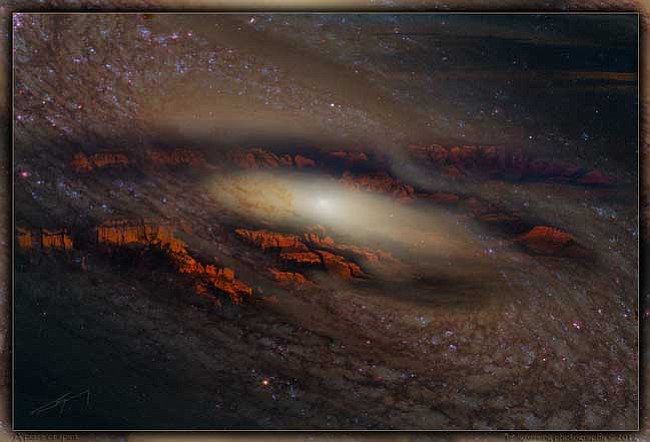 ... in the midst of an ocean of green, nestled below the rim of the Colorado Plateau, or is it an oasis in the midst of a galaxy? Actually on the micro scale it is the island and on the macro it is the oasis. My back up Canon 1DX arrived today and I was anxious to get a few shots with it and see how it worked within the confines of the cockpit in the Lambada so late afternoon it was off to town to deliver a camera to a friend, do a few errands and get up to the airport about an hour before sunset. It didn't look like I was going to get any shots of the rocks in last light because a large cloud formation over the Prescott Valley and going NW from there was blocking the setting sun. I flew in that direction to get close and get some good cloud shots and I did get some nice ones at about ten thousand feet. It also looked like I might get a few minutes with the sun blazing through a gap between the cloud and ground so I hustled back to the Sedona area and dumping altitude as fast as I could. I was rewarded with about ten minutes of good shooting ... I took this shot from roughly over Casner Mountain looking to the NE. Also visible about fifty to sixty miles to the ENE was the brilliant star like reflection of the sun on the Discovery Chanel Observatory up on the plateau. What an amazing eye into the universe the facility is ... it seemed appropriate to bring a little mystery to our small area which is also known for vortices and spiritual mystery. Whilst I put the plane away I was treated to the music of tom tom drums and chanting somewhere on a nearby peak. I hope you enjoy the image and the journey.

I landed just as the sun was slipping behind the distant Bradshaw Mountains and as the sun was in its last moments of visibility I cranked the ship into some steep banks and got some neat photos with reflections of the sun and clouds on my left wing. Saving for some future use. Also sliced a piece of opal rough I have been contemplating for some years wondering if the stone was as good on the inside as it appeared to be on the outside. The piece of rough weighed in at nearly twenty grams and after cutting it there are two matching stones of unbelievable beauty. My friend Murray (Australian Opal Dealer and all around nice guy) has been asking for photos of some of the opal I have been cutting so will take some shots tomorrow and incorporate them into the image tomorrow night. You will drool Murray!!! Also finished a couple of portfolios of photographs for some local organizations, a little law and a nice day with Corky ... and Q. Another tomato is growing on the vine so return on investment may be pretty good ... better than my brother-in-law Ace who has only one tomato on his plants.

Time for a wrap on the day ... one of the better days I can imagine having the privilege to have lived, and now the promise of yet another day which will soon be starting. Enjoy those whom you meet today ... we're all just trying to get through life and enjoy the journey.