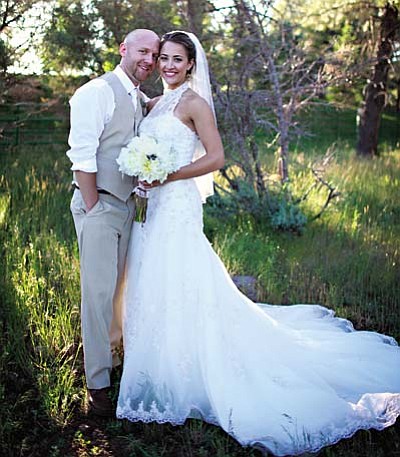 Courtney Vickers and Brad Bowers of Cottonwood were married on June 9, 2012, at Foxboro Ranch Estates. Courtney is the daughter of Loren and Susan Vickers of Flagstaff. Courtney graduated from Sinagua High School in 2005 and Arizona State University in 2009. Brad is a 1999 graduate of Mingus Union High School and a 2003 graduate of Northern Arizona University and is the owner of Environmental Biomass Services, Inc. Brad is the son of Karen and Gene Johnson of Clarkdale and the late Chuck Bowers. Maid of Honor was Kendall Vickers, sister of the bride. Best Man was Drew Bowers, brother of the groom. The couple spent their honeymoon in Tahiti and will reside in Cottonwood.