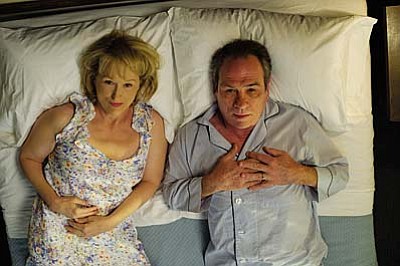 Hope Springs is an adult movie, about adults. It might have been written and shown as a 'nowadays' youth oriented film since there is much discussion and reference to sex. But it pleases as it is with no nudity, no explicit sex activity, no foul language, etc.

Hope Springs is about a middle-aged couple, Arnold (Tommy Lee Jones) and Kay (Meryl Streep), married 31 years, living a financially comfortable life in Omaha. Their empty nest is well ordered and their relationship is well ordered, to the point of a complete lack of warmth. They sleep in separate bedrooms, never as much as embrace, haven't had sex in years and rarely converse.

Kay decides that this won't do. She tries to seduce Arnold one night but he is cold and apparently uninterested. He begs off with complaints of back trouble and exhaustion (at least he didn't claim he had a headache). Kay finds a very persuasive brochure from a marriage counselor in Maine. She decides to pursue that path to attempt to bring love and warmth and passion back into their marriage.

She has purchased two airline tickets but Arnold is not interested. Kay packs and leaves. Arnold grudgingly joins her at the last moment.

They meet the counselor, Dr. Feld (Steve Carell). He gets right to work, asking about their marriage and their feelings for each other. Kay struggles to respond to the personal questions. Arnold refuses to answer most of them and does nothing but belittle Dr. Feld and this whole experience. When the subject gets deeper into sex, Arnold cannot bear it while Kay tries to deal with it, as difficult as it is for her.

Gradually, very gradually, Arnold begins to cooperate as he struggles to complete the progressive exercises prescribed by Dr. Feld.

If you have a notion about how this movie ends, you are probably correct! This is one of those instances where the joy is in the journey.

Hope Springs is essentially a three-person play. And it is fine because they got the right three actors. Steve Carell has a low-key role as the counselor. He speaks softly and spends the whole movie in his office sitting in his chair facing Arnold and Kay. He is immune to Arnold's hostility and verbal abuse.

Meryl Streep is excellent in her portrayal of this woman who is trying to revitalize her life and her husband's life and their life together. She makes us feel Kay's reserve and timidity when Dr. Feld asks her to reveal her innermost thoughts and fantasies.

Of the three principals, Tommy Lee Jones stands out as the central character in the movie. His expressions drive every scene he's in as he scowls and growls and spews negative feelings about the whole enterprise.

Hope Springs is one of those films that will have you laughing at much of the dialogue and at the scenes where Kay and Arnold deal with their awkward gaffes in the bedroom. And you may shed a tear in some of the more touching moments.

Hope Springs is playing at the Harkins Sedona 6 Theater.