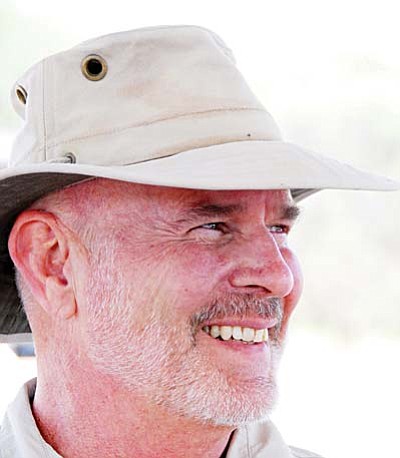 ‘It politicizes the process. It is easy to see the results of that with the way the WAC has operated since three technical members work for WAC community members. We’ve gotten gridlock.’ -- Doug Von Gausig

Their main disagreement is whether to appoint someone who is employed by one of the Water Advisory Committee members - Cottonwood Natural Resources Director Tom Whitmer - or someone who does not work for a local government.

Prescott-area WAC members actually fired Meyer six years ago from the Technical Advisory Committee after Meyer criticized studies by Prescott's hydrology consultants. Since then, all the Prescott-area TAC members have been employees of Prescott-area municipalities.

"It politicizes the process," Von Gausig told the Verde Independent in June. "It is easy to see the results of that with the way the WAC has operated since three technical members work for WAC community members. We've gotten gridlock. We can't even run that (U.S. Geological Survey groundwater computer) model that we have paid for, because the TAC members are all aligned with the members of WAC from the Prescott side."

Davis expressed frustration at Wednesday's WAC meeting with the now 16-month delay on using the USGS computer model to see how future population growth might affect local water resources such as the Verde River. TAC members have been working with the USGS on refinements to the model that Prescott-area communities wanted.

"I think we've been appeasing people for a while," Davis said.

Cottonwood Mayor Diane Joens, also the WAC co-chair, told fellow WAC members Wednesday that she has not agreed to appoint Meyer. She later said she'd rather have Whitmer, and she prefers someone who lives in the Verde.

Cottonwood hired Whitmer with the idea that he would be perfect to represent the Verde on the TAC, especially since Cottonwood is the only Verde municipality with a water resources manager, Joens said.

Whitmer has vast experience in water issues as the long-time manager of regional water planning for the Arizona Department of Water Resources, and he used to represent that agency on the WAC.

Joens noted that the Verde WAC members previously chose Cottonwood's former water resources manager, Bob Hardy, to serve on the TAC. She said she has no problem with Prescott-area municipal employees serving on the TAC, either.

"I feel like the WAC has been very successful with the TAC we have," Joens said. "Those communities pay into the WAC and they have chosen their TAC members."

It might be best to expand the six-member TAC to allow each WAC member to choose a TAC member, she said.

That issue might be part of the discussion the next time the WAC meets, along with the Verde TAC appointment. It's unclear whether the WAC will meet next month or wait until October.

"We're kind of getting away from the purpose of the TAC," Davis said after Wednesday's WAC meeting. "It's turned into a political body" instead of providing "neutral objective information" to the WAC.

Municipalities and county supervisors from the Prescott area "want to load it up with people who don't want to hear the true science," Davis charged.

"He is only going to do what science, research and education has shown him," Davis said. "I wish all the TAC members had that capability."

Davis said he's also uncomfortable with Cottonwood having its employee on the subcommittee because Cottonwood is seeking to annex nine sections of state trust lands between Cottonwood and Sedona near the Verde River for development.

"We know Whitmer's a great guy ... but now he's on the payroll for somebody and we don't know if we'll get that objective view," Davis said.

Joens said her fellow Verde WAC members never told her about this issue. Cottonwood wants to see the trust lands developed with open space and water lines instead of septic tanks like the neighboring Verde Village, she said.

"The Verde people don't want more growth, but it will come and we need to manage it," Joens said.

Yavapai County Supervisor Carol Springer of Prescott, who has long been involved in water issues, said it's up to the Verde officials to pick their own TAC members.

In the past, the Yavapai County Board of Supervisors has automatically ratified TAC choices. Two supervisors are from the Prescott area and one is from the Verde. But the WAC has never agreed to a specific procedure for new TAC members, only a draft. Prescott-area WAC members and Verde WAC members each appoint three members to the TAC.

Meyer is about the worst person the Verde could choose in her mind, Springer said, because she believes he's biased against the pipeline Prescott wants to build into the Big Chino Aquifer.

Springer voiced support for Whitmer, as did Prescott City Council Member Steve Blair, who is the new WAC co-chair.

It's perfectly appropriate for government employees to serve as technical advisors, Springer said.

"From my perspective, the WAC is a governmental body and therefore these are the people who have the authority to control water decisions," she said.

Meyer represented the Prescott area on the TAC until 2006, when he sent a letter to Prescott officials that criticized Big Chino pipeline studies by Prescott's groundwater consultants. Bob Roecker, then a Prescott City Council member and WAC co-chair, kicked Meyer off the TAC a month after the city received the letter from Meyer and fellow retired USGS scientist Ed Wolfe. The current Yavapai County Board of Supervisors later ratified Roecker's action on a 2-1 vote with Davis dissenting.

With that change, all three of the Prescott area representatives on the TAC were municipal water employees, and that arrangement continues today.

County and municipal leaders in Yavapai County created the Water Advisory Committee in 1999 to help reduce water conflicts, especially after Prescott announced its plan to pump groundwater from the Big Chino Aquifer and pump it south to supplement its depleted groundwater supplies. The county and each of its municipalities and Indian tribes are WAC members.

Downstream Verde Valley officials and others have worried about how Prescott's Big Chino pumping could affect the flow of the Verde River, since scientists generally agree that the Big Chino supplies at least 80 percent of the base flow in the Upper Verde River. Prescott has not produced a mitigation plan about how it would avoid or reduce such impacts.

"Failure to (institute better management practices) will result in an eventual drying up of our water supply," Meyer wrote in an October 2011 Daily Courier column.