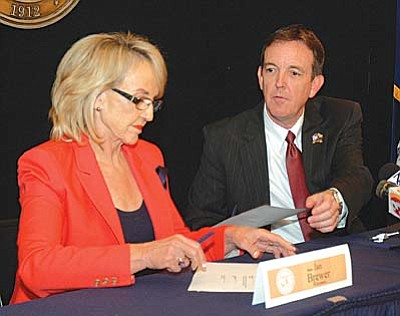 PHOENIX -- The state's chief election officer said Monday that the way he reads the law, Jan Brewer's reign as governor ends January 2015, no matter what she and her lawyer say.

Secretary of State Ken Bennett said he understands Brewer's belief that the two years she spent finishing off Janet Napolitano's term does not count toward the two-term limit voters mandated in 1992. And Brewer, elected in her own right at the 2010 election, is saying she could run again in 2014 if she wants, something she had not yet decided.

Bennett, who was appointed to his post in 2009 when Brewer became governor, said he has not studied the legal arguments about a third term being advanced by Joe Kanefield, the governor's former legal counsel.

"But we read the constitution on its face that any portion of a term counts as a full term,' he said. "And both of us will therefore have served two terms by the time the 2014 election occurs.'

Bennett's comments came at the formal certification of election results, an event that normally would include the governor.

But Brewer was not around to respond. She sent word to Bennett late Friday she would be out of state through this coming Saturday.

That left Bennett to serve as acting governor for the ceremony.

Brewer press aide Matthew Benson would provide no specifics on the governor's travels, other than to say she is on "official business.'

But there were indications late Monday that Brewer is enroute to Afghanistan to visit Arizona soldiers serving there. Military protocol requires such secrecy ahead of visits by dignitaries, just as there was no advance notice in 2007 when Napolitano made a similar trip to Iraq and Afghanistan.

Bennett's interest in Brewer's legal options in 2014 is more than academic: He already has formed an exploratory committee for governor for that election. But Bennett sidestepped a question of whether he would take legal action to keep her off the ballot should she seek the nomination.

"I'm not going to comment on speculative questions about what she might or might not do,' he said. "I'm focused on being the secretary of state.'