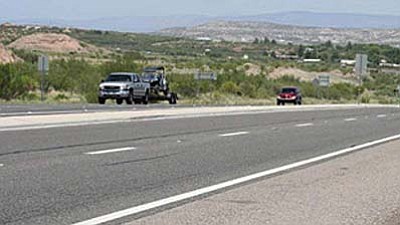 COTTONWOOD -- The Cottonwood City Council has added its support to a new Camp Verde initiative to complete the widening of State Route 260 from Thousand Trails to Interstate 17. That's the portion of the highway never fully widened as a four-lane corridor years ago.

Camp Verde area stakeholders could not agree at the time on the alignment details, especially the number and placement of state highway access points.

After the deadlock, ADOT built only the corridor section from Western Drive to Thousand Trails. A subsequent project constructed "safety" features on the eastern section, including passing lanes and improving sight distance.

In the intervening years, Verde Valley communities have lobbied ADOT to bring the SR 260 work to their five-year construction plan. The widening was finally added back to the program in the current plan, but without adequate funds. One million dollars is included in the 2015 ADOT budget for design, with $6 million for construction in the 2016 budget.

Camp Verde Town Manager Russ Martin, in October, recommended, and the council approved, a $15,000 consultant contract with Marathon Public Affairs to move the ball forward and "make this happen at levels beyond the Verde Valley."

The Tuesday resolution approved by the Cottonwood Council urges ADOT to complete the widening of the highway to the interstate highway.

The resolution also agrees to help support the project: "We also hereby commit to assign a design/engineering/planning professional to work with a team from ADOT and other Verde Valley communities herein to develop a recommended design for SR 260.

Two speakers rose from the council audience to address the highway expansion. Bob Richards is a member of the Verde Valley Transportation Planning Organization. Richards said the shoulders are inadequate and that should be an issue the city should recommend that the county include in its transportation plan update.

Kevin Dix of the Verde Valley Cycling Association also supported improvements to the shoulders where cyclists ride. He described the cracks in the pavement on SR 260 shoulders as "bone-jarring."