A third term for Brewer? Despite law, some say it's possible 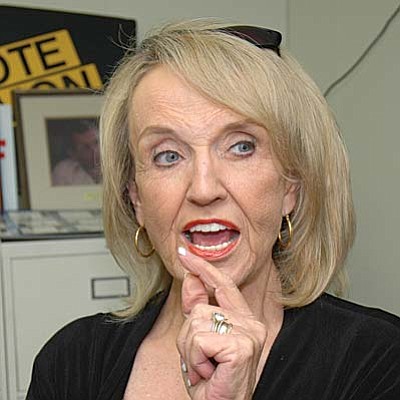 PHOENIX - With attention turning toward the 2014 gubernatorial race, much of the discussion revolves around Gov. Jan Brewer's intentions - and whether she's even eligible to run.

Brewer has spoken publicly about the possibility of running for a third term even though the state Constitution limits members of the executive branch to two terms. The language considers a partial term the same as a full term.

In mid-November, Joseph Kanefield, Brewer's former general counsel, said in an Arizona Republic guest column that Brewer could seek a court ruling allowing a third term based on what he calls constitutional "ambiguity."

Now a partner with the law firm Ballard Spahr LLP, Kanefield said this ambiguity can be found in the state Constitution's separation of the section dealing with gubernatorial succession from the section dealing with term limits. Arizona voters passed a proposition in 1992 that established term limits for various government positions, including the two-term limit for the governor.

"I don't think the voters were thinking about that situation (gubernatorial succession) when they included that 'part of a term' language," he said in an interview.

Governor is the only executive branch position for which there is a constitutionally determined line of succession.

Fred Solop, a professor of politics and international affairs at Northern Arizona University, said a court can rule based on documentation showing the intent of those who proposed a law. But he added that probably wouldn't apply in this situation.

"Given the absence of documentary materials, it's impossible to infer the intentions of the voters, that the intentions were different than the actual wording of the Constitution," he said.

Secretary of State Ken Bennett, the state's top elections official, told reporters recently that he doesn't think Brewer would be eligible should she decide to attempt a run. A spokesman said Tuesday Bennett wasn't available to comment further.

A spokesman for Brewer said in an email that he didn't have anything to add to the discussion and that the governor is focused on the remaining two years of her term.

Solop said that because Brewer seems to be "testing the waters" with regards to a third term, the lack of other Republicans coming to her defense may play a large part in her eventual decision.

"Given that there isn't any other support coming, outside of her general counsel, I'd be surprised honestly if she does take it to the next level," he said.

• Article 5, Section 1, Clause A of the Arizona State Constitution (as amended in 1992) says, in part, the following regarding limits for the office of governor:

• Article 5, Section 6 of the Arizona State Constitution establishes the gubernatorial line of succession as the secretary of state, the attorney general, the state treasurer and the superintendent of public instruction.