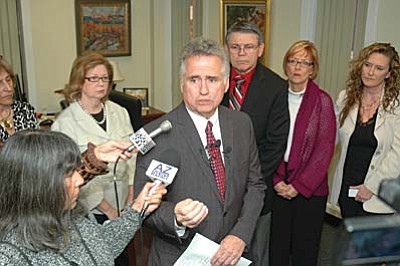 John Huppenthal, the state's superintendent of public instruction, explains Friday the training available -- but not mandated -- for public schools to deal with threats of violence like the incident in Connecticut. Huppenthal said it's up to parents to ask school officials if they've gone through the program. (Capitol Media Services photo by Howard Fischer)

PHOENIX -- The state's top education official said Friday it's up to parents -- and not his agency -- to ensure that local schools have threat-assessment and violence prevention programs to avoid shootings like the one in Connecticut.

But John Huppenthal, who as a legislator voted to allow guns on college and university campuses, would not say whether he thinks incidents like this mean faculty and staff at public schools should be allowed to carry guns in defense of themselves and students.

Huppenthal, Arizona's superintendent of public instruction, said the Department of Education makes "state of the art training' available. But aides had no immediate figures on how many of the state's more than 200 districts have gone through that training.

In the wake of what happened Friday in Connecticut, Huppenthal said that sends a message to parents.

"In response to this, it would be appropriate for them to ask their school officials, 'Have you gone through the training? Do you have a great relationship with your local police department?' ' he said.

And Huppenthal sidestepped questions of whether such training should be mandated.

"Those kinds of things can be an ongoing discussion as part of the legislative session,' he said. Instead, Huppenthal said his agency would "strongly encourage' school officials and staff are trained.

Huppenthal, who served in the Legislature for 18 years before being elected to his current post in 2010, voted repeated to expand the number of places where individuals can carry weapons.

That includes both bars as well as college and university campuses. The first measure became law; the second one, while approved by lawmakers, was vetoed by Gov. Jan Brewer.

In pushing the latter in 2009, Huppenthal said allowing those who have a state-issued permit to carry a concealed weapon to bring them onto college campuses would cut down on the number of massacres that occur there. In fact, he said, that has happened in Arizona.

Huppenthal did not refer by name to the 2002 incident at the University of Arizona, where three instructors at the College of Nursing were slain by student Robert S. Flores Jr., who then turned the gun on himself. But he said at the time the evidence shows that it makes sense, from a safety standpoint, to let people carry guns.

"The states that have concealed-carry (laws) have statistically significant smaller mass shootings,'

Huppenthal, a state senator at that time, said he did not support guns on public school campuses. But on Friday he was unwilling to say how he feels, one way or the other.

"Those kind of discussions are inappropriate at this time,' he said. Huppenthal said he was speaking out not only to express grief but to let the public know his agency was looking at its own preparations, both to prevent these situations and to deal with them when they occur.

He noted that reports from Connecticut said this was not some stranger showing up randomly at this school but had links there. Huppenthal said that's why training in doing initial threat assessment is important, providing school officials some basis to determine if professional help is needed.

"The threat assessment is really the chance to catch this early on and prevent it from ever happening at all,' he said. "A lot of these deeply disturbed individuals, if you identify them early, you can deal with that, they can get the help that they need, they can stay on the right track in society, and everybody can be a lot safer.'

But Jean Ajamie, the department's director of school safety, said that training is not required but only offered to school districts.

Huppenthal, asked if that should be mandatory, said that could be discussed by the Legislature when it reconvenes in January.

He also acknowledged that the Legislature, in paring the budget in prior years, cut money allocated for school resource officers, police officers based in schools.

"We know that it's been a tough economic environment over the last couple of years,' he said.

"Obviously, intuitively, we would think that having a school safety officer on site would be something that would be helpful in this situation,' Huppenthal said. But he declined to say funding should be restored, saying "that's going to be part of the ongoing dialog and discussion.'