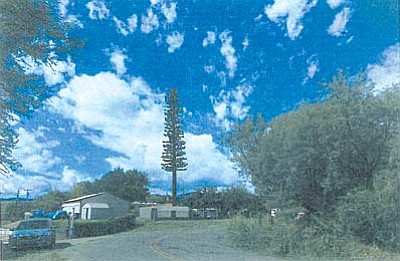 AT&T has plans for six new towers in the Verde Valley that would provide continuous 4G coverage for its customers living in and passing through a corridor running from Camp Verde through Cottonwood to Sedona.<br /><br /><!-- 1upcrlf2 -->

Two proposed cell towers, one in Verde Village and one in West Sedona, may have been temporality withdrawn from consideration with Yavapai County, but AT&T is not stopping plans to give Verizon a run for its money in the Verde Valley.

AT&T has plans for six new towers in the Verde Valley that would provide continuous 4G coverage for its customers living in and passing through a corridor running from Camp Verde through Cottonwood to Sedona.

"It's not just AT&T, it's Sprint also. The valley as well as the rest of Yavapai County is on everyone's map. Up until now, Verizon has been the one provider with thorough coverage in the Verde. But that's going to change," said Adam Brixius with Clear Blue Services, AT&T's agent.

On Jan. 3, the Camp Verde Planning & Zoning Commission will hear a request from Clear Blue Services to construct a 90-foot cell tower in Camp Verde.

The proposed tower, which will look like a pine tree, is slated to go in at the Rancho Verde RV Park. 1488 Horseshoe Bend Drive.

Clear Blue has notified residents within the 1,000-foot radius of the site and a public meeting was held on Wednesday evening at Town Hall, although no neighborhood residents showed up.

Under the Telecommunications Act of 1996, counties and municipalities cannot stop the construction of cell towers based on fears of the radio frequencies used.

Governmental entities can, however, regulate their construction based on "best preferences."

In the case of Camp Verde and Yavapai County, their codes specify that companies installing cell towers first try to conceal the towers. When that's not possible they should be located on town property, along side an existing tower or at least 5,000 feet from private land.

The tower proposed in Camp Verde is on a site Community Development Director Mike Jenkins calls a median preferred site.

"The company must put their tower on a preferred site or prove it has exhausted all other options in an effort to provide the service coverage it needs. After they have done that we really don't have much say in the matter," says Jenkins.