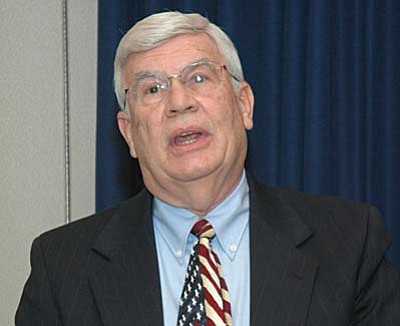 Don Ascoli, one of 11 Republicans selected to cast an Electoral College vote for Mitt Romney, explains Monday how he believes questions remain about the legitimacy of the birth certificate produced by Barack Obama. All totaled, three Arizona electors said as they were casting their votes that they have doubts about Obama’s legal qualifications to serve. (Capitol Media Services photo by Howard Fischer)

PHOENIX -- Arizona's 11 Republican electors formally cast their votes Monday for Mitt Romney -- but not before three of them, including the state party chairman, said questions remain about whether Barack Obama is a natural born citizen.

"I'm not satisfied with what I've seen,' said Tom Morrissey, head of the Arizona Republican Party after signing the formal paperwork to cast his Electoral College vote for Romney. "I think for somebody in the president's position to not have produced a document that looks more legitimate, I have a problem with that.'

Morrissey was not alone. John Rhodes, another GOP elector, expressed similar sentiments as he signed the required paperwork certifying his vote for Romney. Both also specifically used the president's middle name, Hussein, in their public comments.

And Don Ascoli said the fact that a majority of Americans voted for Obama, even having heard those perennial allegations now for years, is irrelevant to finding out the truth. He said that was borne out in the tenure of the last Democratic president.

"The majority of the people had no dream that Bill Clinton did what he did until a young lady had a blue dress and proved he did,' Ascoli said. "And he had to come out and apologize to the world because he lied to you and me.'

Gov. Jan Brewer, sitting in the front row to watch Monday's proceedings, sought after the ceremonies to distance herself from the view of her fellow Republicans.

"The bottom line is everybody's entitled to their own opinion,' she said when asked about how those statements reflect on the GOP. "And I happen to disagree.'

Last year she actually vetoed legislation which would have required candidates for president to provide documents to the secretary of state proving they meet the federal constitutional requirement to be a "natural-born citizen' before their name is placed on the ballot. The measure, dubbed the "birther bill,' would have made Arizona the only place to let a state official determine if a presidential candidate is qualified to run.

Earlier this year, Secretary of State Ken Bennett, acting on his own, did ask officials in Hawaii to verify the authenticity of a birth certificate, a copy of which the White House had placed on the web. At the time Bennett said he was responding to various requests to determine if Obama's name should be on the ballot.

Bennett, who serves as the state's chief election officer, eventually said that Hawaii officials "have complied with the request, and I consider the matter closed.' He said on Monday he remains convinced that Obama does meet the qualifications.

Monday's comments by three people, hand picked by Republican Party officials for the honor of being an elector, shows the issue is far from dead, at least in Arizona. Ascoli said it will remain an open question until federal courts look at the issue. He said lawsuits have been filed.

"And the judges throw out the case because 'you don't have standing,' ' he said of the multiple rulings dismissing these claims.

Ascoli said he gives great weight to inquiries conducted by Maricopa County Sheriff Joe Arpaio who sent an investigator and a member of his volunteer posse to Hawaii to see what they could find. That investigation, Arpaio said, has left questions about the veracity of not only the copy of the birth certificate provided by the White House but also Obama's Selective Service records.

He wants Congress to investigate.

State Rep. Steve Montenegro, R-Litchfield Park, the only elected official among the GOP electors, said after the comments by the others that he was not going to join in the speculation about Obama's right to be president.

"The people have elected him to be president of the United States,' he said. "And that's my opinion.'