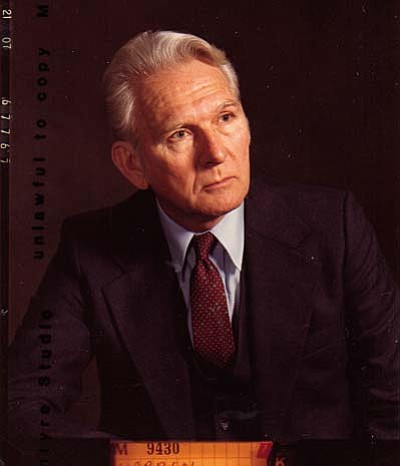 Raymond Alfred Warren, 89, of Cottonwood passed away December 15, 2012 in Flagstaff. He was born April 15, 1923 in Buffalo, New York, the son of Walter and Ida Wojtkoviak.

He received his undergraduate degree from George Washington University. He went on to receive his Masters Degree from Harvard University.

Mr. Warren served his country as a Second Lieutenant in the Army during World War II.

Mr. Warren had a career with US Department of State for 34 years, serving tours in Venezula, Chile and Columbia.He also worked at the National War College, the Department of Defense and later in his life was the Mayor of Snowhill, Maryland.

He was a member of the Episcopal Church and enjoyed politics, the US Stock Market, home restoration and gardening.

His family remembers him as a dedicated husband and father who gave his family 63 fulfilling years and many wonderful memories.

A visitiation will be held on Friday, December 21 in the Westcott Funeral Home from 5 to 7 PM. A funeral service wil follow at St. Thomas Episcopal Church in Clarkdale at 11 AM. Burial will be in All Souls Cemetery. VFW Post 7400 will provide military honors.