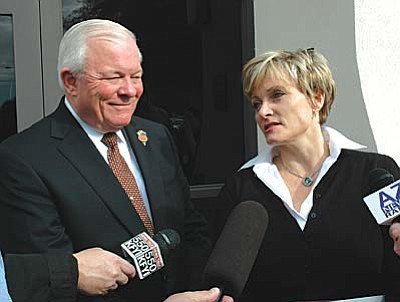 Michelle Ahlmer, executive director of the Arizona Retailers Association, explains legislation filed by Sen. Al Melvin which they said is designed to force online retailers with some presence in the state to start collecting the state sales tax. (Capitol Media Services photo by Howard Fischer)

PHOENIX -- State lawmakers will make a bid Wednesday to close a loophole which allows online retailers to avoid collecting hundreds of millions of dollars of sales taxes.

The measure, SB 1338, seeks to legally redefine who is a "retailer' to include not just companies that sell items from stores here but those that "sell' them from somewhere else but also have distribution centers, warehouses or similar operations within the state.

That change is significant, as federal courts have said taxes can be imposed only when a retailer has a legal "nexus' in the state. And to this point, that has been interpreted to mean only online sellers who also have some sort of actual retail outlet in this state.

Michelle Ahlmer, executive director of the Arizona Retailers Association, said that means Target.com collects the state sales tax when selling something to an Arizona resident because of its stores here. But Amazon.com, she said, does not.

The legislation would sweep in firms like Amazon based on its "fulfillment centers' in Phoenix, where orders are processed. But it would still exempt firms where items are sold and shipped from outside the state when there is no presence in Arizona.

Even that change, Ahlmer said, will make a big difference.

She said a study her association commissioned figured the state lost about $317 million in uncollected sales taxes in 2010. That study predicted that, based on the increasing popularity of online sales, the loss would rise to $576 million by 2015.

Sen. Al Melvin, R-Tucson, who is sponsoring the legislation, which will be heard by the Senate Committee on Commerce and Energy today, said the issue is even more basic than that.

"For me, what it comes down to, is not a question of taxes but a question of jobs,' he said. "In this recession, we need to protect the jobs that individual citizens have.'

Melvin acknowledged that Arizonans can save money by ordering online and not having to pay the state's 6.6 percent sales tax as well as any local taxes. But the senator said his constituents will understand that it's more important to preserve jobs at Arizona retailers than to save a few cents or a few dollars.

That loss, Melvin said, is real, citing a man in his legislative district who had three Christian bookstores.

"He had to close one of them,' Melvin said. "He couldn't compete with the online book sales.'

Ahlmer made it clear that one of the prime targets of the legislation is Amazon.com, which she believes has a presence in the state despite its claims to the contrary.

"There's a very large online retailer that has about four million square feet,' she said, a clear reference to the three Amazon Fulfillment Centers in the state.

Even without the legislation, the state already is targeting that firm.

Earlier this month, the company disclosed that the state Department of Revenue has issued a $53 million assessment for unpaid taxes from March 1, 2006 through the end of 2010.

In a filing with the Securities and Exchange Commission, Amazon said the assessment "is without merit and intend to vigorously defend ourselves in this matter.'

Ahlmer said the way companies have been able to avoid having to collect taxes is by hiring people for Arizona operations under a separate business name or has the property in the name of a subsidiary. She said this legislation would remove any legal doubt.

Don Isaacson, who lobbies for Amazon, said his client is opposed to the bill. He said Amazon believes that questions of interstate tax liability should be resolved at the federal level.

The hearing comes six months after Gov. Jan Brewer publicly toured one of Amazon's three fulfillment center warehouses as part of an example of economic development in the state.

Press aide Matthew Benson said his boss was not informed ahead of time about the Department of Revenue assessment, saying the state agency "determines the proper tax liability for Amazon and every other taxpayer in Arizona.' And he said that, because Brewer cannot access Amazon's confidential records, she cannot comment on whether she believes the company owes money to the state.

But Brewer, while courting firms like Amazon, has sidestepped questions in the past about whether these types of retailers should be collecting Arizona sales taxes.

Amazon has mounted legal challenges to efforts by other states to force the company to collect sales taxes. And its officials have made it clear that decisions of where to locate future facilities is linked to each state's policies on sales taxes.

"Citizens of this country, individuals or companies, are free to choose where to live,' said Paul Misener, the company's vice president of global public policy, following last year's tour by Brewer. "The state and local governments may adopt policies that attract and retain thse citizens.'

Misener said Amazon's position is that the U.S. Constitution established a "federation of states' which retained many powers, and a federal government which took over some, "including the responsibility of regulating interstate commerce.' And Misener said that role "must be respected.'