No murder charges in teen stabbing 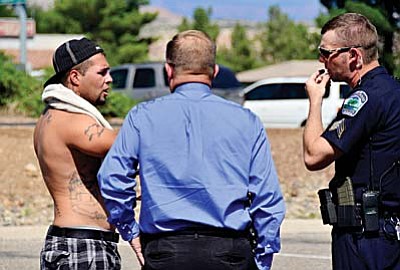 Cottonwood police question one of the men who transported Jake Palmer to the Food City parking lot, where an ambulance then took the young man to the hospital, where he died. VVN/Jon Pelletier

COTTONWOOD -- The Yavapai County Attorney's Office has declined to charge Mason Anderson with murder charges. Anderson admitted stabbing Jake Palmer during a Verde Village confrontation Sept. 27 at a time when both were 17 years old.

Palmer was taken to the hospital but later died. An autopsy showed he had a punctured lung.

While Anderson was not charged with the homicide, he has been found guilty of giving false information to a law officer.

The two boys had exchanged insults ever since, according to friends.

The girl claimed that Palmer was "upset" and began "stalking" behavior, had called her offensive names and threatened her.

According to the Yavapai County Sheriff's Office investigative report, Palmer and two friends had left Bridgeport and turned onto SR 260 that September afternoon, headed to Camp Verde in a Toyota Corolla.

They passed Mason Anderson driving his Chevy Aveo near Jack in the Box. Anderson claimed they were taunting him. The cars passed one another until Anderson pulled right onto Western Drive in Verde Village and the Corolla with Palmer followed.

When Anderson's car arrived at the "dip" at the intersection of Pipe Creek Drive and Grand View Drive, the Corolla pulled in front of Anderson, cutting him off.

Palmer then got out of the Corolla driven by his friend and went to the driver's window of Anderson's car, after telling the others in the Corolla, "I want to fight that dude."

All witnesses concur that Anderson never left his car. He told investigators that he had been in Tae Kwon Do, but never involved in a real fight before. Anderson told police he said, "I'm not going to fight three of you" and refused to leave the car.

Palmer reportedly began hitting Anderson in the face. After he was struck several times, without returning the blows, Anderson grabbed a Remington sheath knife (that the police report describes as a 'filet knife'), which he kept between the seat and the console. He said he held the knife so that Palmer could see it, but he then punched him again.

At this point Anderson said he stabbed Palmer two to three times. "I just went like that," he described, making a stabbing motion with his right hand across the front of his body and upwards. At that point Palmer got back in the Corolla and they left toward the hospital.

Anderson then went to the home where his girlfriend and another friend were and gave them the knife. The friend told authorities she at first put the blood-smeared knife in the sink and turned on the water, but when she asked what she should do with the sheath and Anderson told her to "get rid of it," she refused.

She put the knife back in the sheath. She said she realized they could be destroying evidence.

Anderson then called police and agreed to meet them at the Country Store. Anderson met the sheriff's deputies at the convenience store. He placed the knife on the hood of the car for them, saying he had stabbed Jake Palmer.

The County Attorney's Office said there was no chance for prosecution for "felony murder" based on the merits of the case.

His girlfriend also faces charges of false reporting to law officers and her case is pending in court. She originally claimed that she and her friend were in the car and witnessed the pursuit and stabbing. She later changed that story.