Comedy rocks Relics off the shelf 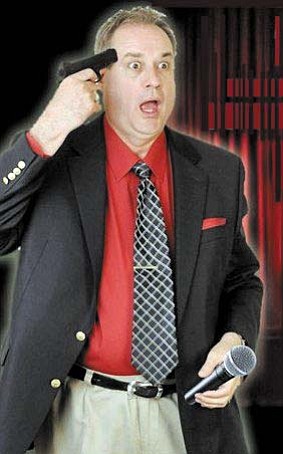 Comedian John Blair has done it again. No not that, get your minds out of the gutter, he and his brand new band of cohorts are performing stand up comedy at Relics again. After the first event sold out the Lawson Room, Relics chose to do it again, this time with twice as many servers and an extra bartender dedicated to providing service to meet all expectations.

John has managed to recruit the finest comedians from Arizona to charm the audience into a feeding frenzy of laughter.

As the host of this enterprise my first choice was Phil Gordon. He and John met about four years ago in Scottsdale; Phil is an original Chicago comedian, now working in Arizona and California.  He recently participated in the 2011 World Series of Comedy Competition, Iowa Comedy Festival, and the Ventura Comedy Festivals. Phil shares his unique experiences as a single dad raising teenagers.  He became a single dad when his wife left for happy hour and forgot to come home. He doesn't spend all his time with teenagers and also describes his hilarious hook ups in the fifty-plus on-line dating world, or as he calls it, "the shootout at the loser corral."

Phil's comedy is straight forward and with a grain of salt.  He performs regularly at Laff's in Tucson. He began his career in Chicago where he was a featured comic at Chicago's fabled Zanie's Comedy Club; Phil can be seen touring across the country at various clubs and casinos from LA's Comedy Store to Wiseguy's in Ogden, Utah, and Las Vegas, Nev. Phil is delighted to visit Sedona where he plans to tour the mystical surroundings in search of the "Jewish Vortex" where he hopes to contact his late Uncle Morty... who left this earth still owing Phil 20 dollars.

Amy Blackwell, on the other hand, is a quirky Arizona comic that John met at the World Series of Comedy in Las Vegas. They performed at Big Al's Comedy Club.

"I had to follow Amy's act and I've got to tell you she is blessed with a quick wit; she's a natural stand-up comedian, and a tough act to follow," Blair says.

Whether people laugh at her, or with her she soaks up the attention.

Growing up in rural Arizona, Amy had to rely on her imagination to keep her busy. Putting on lip syncs, and plays for her friends & family were an almost daily occurrence. Amy caught the acting bug in high school when she enrolled in drama class. She performed in every event she could just to be on stage. Amy stumbled into an opportunity to perform stand up, and was immediately hooked. Drawing from her life experience, and the world around her she began writing gut busting jokes about her life, children, family, upbringing, and dating life "or lack thereof" Random thoughts and observations have become her forte.

Performing clean, family friendly comedy, Amy has been a finalist in the 2011 Great Southwest Laff Off, And Winner of Captain Tripp's Comedy Contest.

The headliner, Bob Kubota, began his career as a stand-up comic in 1987 while still a student of journalism at Arizona State University. Encouraged by virtually no one, he honed his particular idea of humor at "open mike nights" Within two years Bob was "on the bill" for paying customers at legitimate comedy clubs. Only then did he let his parents know that his life dream didn't include bar exams - just bars. His penchant for dry wit, lighthearted sarcasm and deciphering life's ironies has led him to the majority of the contiguous 48 states as well as Alaska and Hawaii. The sly take that he has on his own ethnicity continually proves to be a popular feature of his act. In 1996 he became an international performer when he joined the United Service Organization (USO) and now tours regularly with the "Comics On Duty" (Davis Entertainment) providing comic relief to American military troops stationed around the globe. Bob has now spun his material in Iraq, Afghanistan, Pakistan, Bahrain, England, Iceland, Hungary, Belgium, Bosnia-Herzegovina, Japan, Korea, Singapore, Diego Garcia, Australia, Haiti, Honduras, Cuba, and now Sedona. Bob has appeared on nearly a dozen comedy programs featuring stand-ups, from Comedy Central to A&E and MTV. He currently resides in Phoenix, Arizona with Ilene, his wife, Nancy, their corgi-mix, a laptop and a golf swing that he built himself.