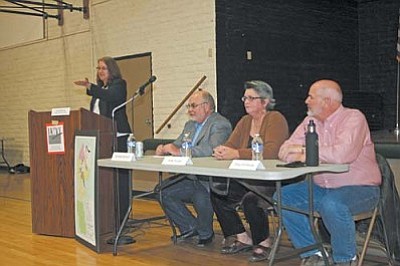 CLARKDALE - A small group of residents turned out Wednesday night to listen to, and ask questions of, the town council and mayoral candidates. The League of Women Voters of Sedona-Verde Valley sponsored the primary election forum at the Clarkdale-Jerome School gymnasium.

Mayor Doug Von Gausig is running unopposed for re-election. Two council seats are up for election with three candidates for those seats. Incumbents Vice Mayor Richard Dehnert and councilwoman Pat Williams are seeking re-election, and challenger Anita Simgen is running for one of the two open seats.

Council seats and mayor are elected to four-year terms in Clarkdale. The 2012 General Plan for Clarkdale, which is an update of the 2002 Plan, is also on the ballot.

Von Gausig has served as mayor of Clarkdale for eight years. He recently was elected as president of the Arizona League of Cities and Towns, which represents 91 communities in the state. He also is a longtime resident of the Verde Valley and business owner in Clarkdale.

Williams was absent from the forum, but forum moderator Liz Danbury read a statement by Williams. She has served two terms on the council. She also served on the Design and Review Board and the Clarkdale Heritage Conservancy Board.

Dehnert was elected to the council in 2008, and he previously served on the Board of Adjustment for several years. He moved to the Verde Valley in 1979. He and his wife raised four children here, and he owned KVRD FM/AM Radio for 17 years. He currently works for the Verde Valley Guidance Clinic.

Simgen has been in the Verde Valley for 12 years. She served on the Clarkdale Board of Adjustment in 2004, and she was on the NACOG Area Agency on Aging during 2008-2009. She also has been active with Matforce.

The moderator asked all candidates what they see as the three most important issues facing Clarkdale. All three listed economic development and water issues as among their top three concerns.

Simgen said Clarkdale must find creative ways to continue growth. She also said she has been educating herself and going to meetings to learn about water and Verde River issues.

Von Gausig said there are both long term and short-term issues. He sees water issues as long term. "We've got to have a strategic plan," he said. That plan, he says, must look forward by 20 to 25 years.

He also identified economic development as one of his top issues. He believes that two current projects underway in Clarkdale - Sustainable Clarkdale and The Verde River @ Clarkdale - will both have significant, and positive impacts on the town's economic future.

Dehnert also put economic development at the top of his list. He said Clarkdale is a great place to live, but it doesn't have much business to create a revenue stream. He said the sustainability program and the town's historic district will be important to development.

A follow-up question asked all three candidates what a vibrant economy in Clarkdale would look like.

Von Gausig pointed out that Clarkdale basically sits at the end of the road. "We've got to build the traffic," he said.

He said he does not see Clarkdale developing strip malls or big box retail outlets. Instead, he thinks economic development for the town will be tied to the concept of Sustainable Clarkdale and The Verde River @ Clarkdale.

Dehnert said Clarkdale's future and economic development cannot be dependent on growth. "Bad things can happen when there's a downturn," he said.

He feels that history is important to Clarkdale's economic development. "We're looking into creating an entertainment district," he said.

Simgen said people from out of town come to ride the train and then drive through town to see Jerome.

"We do not want Clarkdale to become generic," she said. "I see the downtown area revitalized."

She said more events are needed, such as car shows and music events.

The candidates made short closing statements.

Simgen said she has spent the last year trying to educate herself about local government, including police and fire departments. She said she has the desire, energy and time to serve on the council.

Von Gausig said he has a lot of optimism about Clarkdale's future, and he feels the town is going in the right direction. "We're really going places in Clarkdale," he said.

Dehnert said one thing he likes best about Clarkdale is the town's sense of community. As an example, he talked about last year when donations and a community effort to reopen the public swimming pool was successful, raising about $60,000 in six months.

"That doesn't happen unless you have a really strong sense of community," Dehnert said.

Early ballots are already out, and voting continues until 7 p.m. on Election Day, March 13.