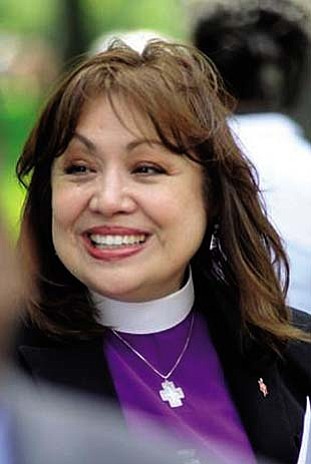 A century of faith in the Verde Valley will be celebrated Sunday, Jan. 8, by Mountain View United Methodist Church when Bishop Minerva Carcaño inaugurates the Cottonwood church’s centennial year.

Bishop Carcaño, presiding bishop for United Methodist churches in Arizona and eastern Nevada, will deliver the sermons at the 9 and 11 a.m. worship services.

At the 10 a.m. Centennial Hour members of the church when it was at Clarkdale will be recognized by the bishop. Arizona’s state flag will be flown, and at the close of the hour, the church bell will toll 10 times – once for each decade of the church’s century of service.

The Rev. Paul McCleary of Clarkdale, a retired United Methodist pastor, traced some of Mountain View’s early beginnings. It began in the Verde Valley in 1912 with George B. Jones, a lay preacher.

Later that year, The Rev. B. T. Stauber was assigned to the Methodist Church’s Jerome-Clarkdale circuit, with the church meeting in a school house before moving to the former Masonic Lodge in Clarkdale.

In 1921, said the Rev. McCleary, the church was housed in a new sanctuary and was named the Clarkdale Community Methodist Episcopal Church. When the congregation outgrew its space, construction began in 1977 for an addition. The building now in the Clarkdale Public Library.

As church membership continued to grow, land was purchased on 12th Street in Cottonwood, where a building was completed in 1990. Later, the present worship center was finished in 2002.

Today, with a membership of more than 300, Mountain View’s current pastor is the Rev. Laura O’Neil, who will welcome Bishop Carcaño for Sunday’s services.

The bishop became the first Hispanic woman to be elected to the episcopacy of the church in 2004.

Prior to that she pastored several churches in her native state of Texas, serving later as director of the Mexican American program of Hispanic studies program at Perkins School of Theology.

Bishop Carcaño is the official spokesperson for the 69-member United Methodist Council of Bishops on immigration issues.

Her ministry has always involved work with the poor, with farm workers, immigrants and refugees, even as she encourages congregations to work ecumenically and to active in community organizing.