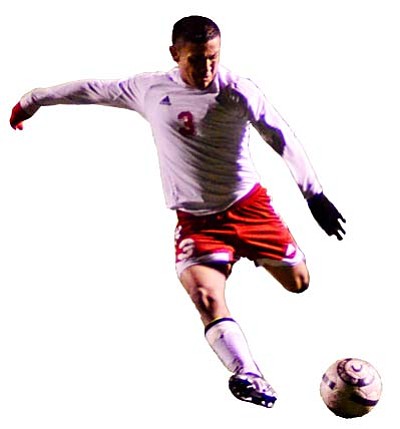 Since losing the first power-point game of the season to Bradshaw Mountain in a shootout, the Marauders have not lost another power-point match.

Mingus won three games in a row by a comfortable margin, but in the game against the Panthers the Marauders had trouble converting scoring opportunities. The Coconino keeper also made some nice saves.

Cristian Escobar scored in about the15th minute for the Marauders assisted by Elias Pondeca. Escobar didn't play in the Marauders' loss to Bradshaw. With Escobar the Marauders have a much better chance to win because he scores a lot -- at least one score in every game he's played so far this season.

"Cristian adds a lot to our attack," said Mingus head coach Cade Densmore. "He's a dynamic player, he makes great runs, he's unselfish, and he's a go-getter. He stays after everything. The goal he scored tonight was his eighth goal on the season. He's scored at least one goal in every game he's played in and he's got a couple hat tricks. He battles from whistle to whistle - he's kind of our spark plug this year."

The second goal of the game came off the foot of Panther A.J. Novelli on a free kick from about 40 yards out.

After the equalizing score, the game stayed knotted at 1-1 until the shootout. Mingus keeper coach Bill Murray inserted Johnny Lara in the second half replacing Gilbert Quidera. They have split time in goal about 50/50. Murray stayed with Lara in goal for the shootout.

"At practice we try to work really hard and Bill is a great trainer for us. We try to do everything he tells us to, and tonight it came down to a shootout and look what happened - we won. We just got to keep on it and keep working hard," said Lara.

A lot of times in shootouts keepers guess which way to dive, but Murray told Lara to follow the ball.

"I knew the players were tired and they wouldn't have their best shots, so my instructions to Johnny was to just watch the ball. Don't guess, just follow the ball. It paid off," said Murray.

Every shot for both teams in the shootout was on frame, but Lara blocked two and the Coconino keeper blocked one.

Lara was close in blocking two other shots too, but his best was a kick save. The final save for Lara was simple: the Panther miss hit the shot and Lara just had to fall on the ball.

After Lara's final shootout save the Mingus squad mobbed Lara and chanted his name, "Johnny! Johnny!"

He was given the game ball.

Of course the Marauders would rather win in regulation, but grinding out a shootout win has its benefits.

"This win shows we have character and we can win a close game, but it was too close. We tried to create a scenario in a game the other day where we said, 'lets pretend we need to score in extra time and we don't want the game to go to PKs.' Our guys scored three goals in three and a half minutes. This game was a different story. We struggled to score, but what's good about the outcome is it shows our guys we can win in a shootout, and since we lost the first shootout of the year, that's important and hopefully this will help us later on," said Densmore.