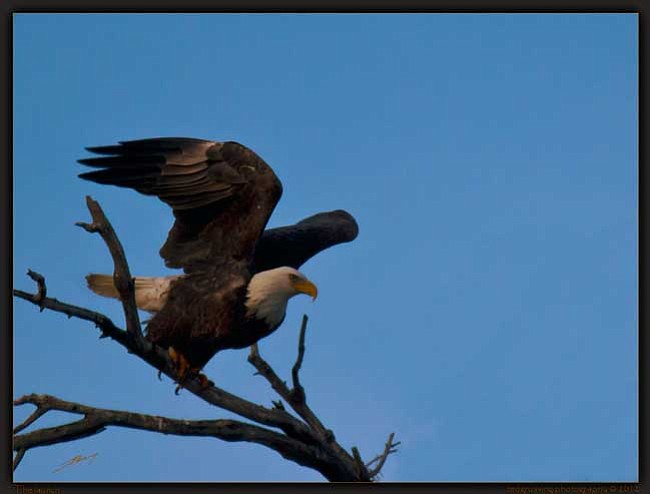 ... into flight and what a marvelous sight as this adult Bald eagle launched into flight as I approached his perch high in a tree overlooking the ponds. Today was pretty much non-stop work and at 4:30 Corky and I decided to get out of Dodge and take a drive to relax. Somehow the van found its way to the Ponds and although the light was going away quickly I was able to get some decent shots. Most of the ones of ducks were too noisy to keep, but a few were not bad and all of the ones I took of herons, hawks and the eagles in the trees turned out respectable. The others had histograms with most of the information in the mid tones and shadow area ... make that a noisy image.

Our friend Noel is flying in to Sedona later this morning and we're going up to have a visit with him. Noel taught me all my basic flying skills and also was my instructor for advanced aerobatics. He instructs in the Army now and will be coming in in a Citation. Although we have kept in touch it will be good to see him again. Then perhaps a flight and back home to get some work done.

Have a wonderful day, and be glad that there are not much larger predators with proportionally larger talons than this eagle. Thank heavens for climate change, else wise we would be looking over our shoulders for the Pterosaurs and other large winged predators that were here as recently as sixty five million years ago. I wonder what species will replace us as earth continues its journey around the sun and through space; perhaps we will continue to evolve instead of becoming extinct. The average species makes it about a million years. Earth will be around for another four or five billion years.

Enjoy the day, be well, be a blessing so that you may be blessed.