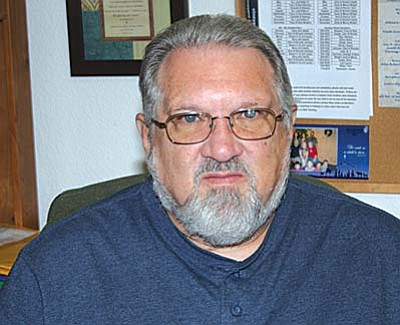 COTTONWOOD - Randy Sutter, pastor of Vineyard Christian Fellowship of Cottonwood, believes that God has been at work helping his church find a permanent location. "We closed the sale on this Dec. 28," he said.

Sutter was ordained in 1989 and stepped in as senior pastor at Vineyard. "We've been ministering in Cottonwood since," he said.

"In 2008, we had the opportunity to completely restart the church," he said. "We started over with 25 adults and about 10 children."

He said the last three years have been significant, and, he believes part of God's plan for the church.

He explained that in January 2009, he was sitting in his office watching the P Allen Smith's gardening program on television. "It was like the Lord tapped me on the shoulder and said, 'Watch this and you will see your church.'"

The program described how a tree is uprooted and replanted. He said the show's host explained how during the first year after being replanted a tree sleeps because it is in shock. The second year, the tree creeps as the roots begin to grow again seeking water and nutrients. Then, during the third year, the tree reaps and begins to produce visible fruit.

"It's like the Lord gave me a three-year process," Sutter said.

He said that during the third year, "we were at the Mingus location about half the way through the year. The Lord said 'I don't replant a tree in the same hole.'"

Sutter said this whole process of being able to buy the Zalesky property came together in two months. When the deal was done, it was just shy of a full three years that Sutter recognizes as the Lord's plan and also the same three years that it takes for a replanted tree to begin to bear fruit again.

"Our first Sunday as owner was Jan. 1, New Year's Day," he said. "That three-year picture that God had given me, and how we ended up with this property, is just amazing."

He said that first Sunday was a celebration. "For this year, God has given us the word 'Joy.' So it was a joy-filled Sunday celebration about what God had done."

Sutter said Vineyard Christian Fellowship is still sharing the property with the Verde Valley Christian Church. That church holds services at Dr. Daniel Bright School until it gets moved into its new property. But both churches have shared the Zalesky property for months.

"As they were gracious to us, we want to be gracious with them," Sutter said. "They have been wonderful to us."

Sutter said Vineyard won't do any remodeling until VVCC is completely moved into its new home. "Then we'll do some remodeling," he said.

He explained that some changes have been made with rooms and office space that the two churches are not sharing.

Vineyard Christian Fellowship of Cottonwood meets for Sunday services at 10 a.m. The church also has a Kids' Church program with classes for all ages and a nursery.