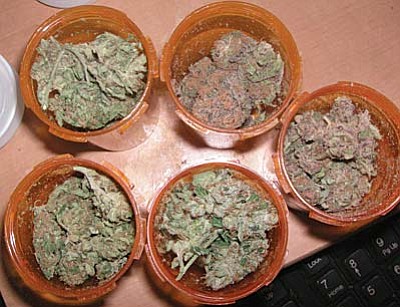 Brewer said she will not pursue a lawsuit seeking a ruling of whether state employees who process those applications can be prosecuted under federal drug laws. A judge threw out that lawsuit last month as legally flawed but gave the governor a chance to fix the problems and refile it.

That, Brewer said, will not happen.

"I have directed the Arizona Department of Health Services to begin accepting and processing dispensary applications,' Brewer said. But Brewer said no license will actually be issued until a state judge, hearing a separate lawsuit, determines the legality of the rules enacted by the health department restricting who can operate a dispensary are legal.

That could take a while: An attorney who represents those challenging the rules said Friday he will not drop the case, even if that would expedite dispensary licenses finally being issued. And whoever loses at the trial court is likely to appeal.

But Joe Yuhas, spokesman for the Arizona Medical Marijuana Association, said Friday's action is still a victory for those who convinced voters in 2010 to approve a medical marijuana law.

That law allows those with certain specified medical conditions to get a recommendation from a doctor that they use marijuana. That recommendation entitles the person to obtain a card from the health department allowing them to obtain up to 2 1/2 ounces of marijuana every two weeks.

So far the health department has issued nearly 18,000 such cards.

The law also envisions about 125 state-regulated non-profit dispensaries where those with the cards could get their drugs.

Brewer, however, blocked state health officials from even accepting applications. That came after Dennis Burke, who was the U.S. Attorney for Arizona, refused to provide assurances that state workers who process those forms would not be prosecuted under federal laws which make it a crime to facilitate someone else getting marijuana.

The governor then filed suit in federal court asking Judge Susan Bolton to rule whether there is immunity.

Last month, though, Bolton tossed the lawsuit, saying the court was not in the business of issuing advisory opinions. She also said there was no evidence anyone would be prosecuted, pointing out that no federal prosecutor in any state with a medical marijuana law had brought charges against any public employee for processing paperwork.

Bolton gave Brewer a chance to refile the case. But gubernatorial press aide Matthew Benson said that made no sense.

"At this point, from the governor's perspective, we've kind of reached the end of the line in terms of legal remedies,' he said. Benson said it makes more sense to just let the law take effect as enacted by voters.

Brewer stressed, though, she would pull the plug "if I receive indication that state employees face prosecution due to their duties in administering this law.'

That still leaves the remaining lawsuit filed filed on behalf of some would-be dispensary operators who found the rules locked them out of the process.

One of those rules requires applicants to have been an Arizona resident for at least three years. Another says only people who have filed a state tax return for the last three years can run a dispensary.

Attorney Ty Taber said nothing in the voter-approved measure gave state Health Director Will Humble the power to enact such restrictions.

"Every person, whether they live in Arizona or come from outside of Arizona, whether they paid taxes here or somewhere else, has a right to come here and apply and be treated fairly based on their application,' Taber said.

Yuhas, however, said such a restriction is reasonable.

"We didn't want to make the mistakes of other states,' he said, where their medical marijuana programs have few limits and there have been abuses. For that reason, Yuhas said, there is good reason to keep those who are running dispensaries in other states from coming here.

The rules also disfavor giving a license to anyone who has an overdue fine, unpaid child support or is not current on a student loan.