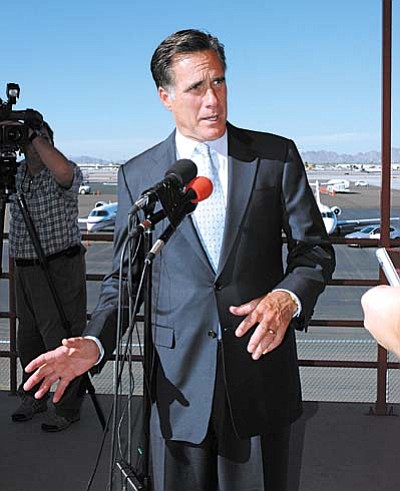 Mitt Romney's support in Arizona is greater than that of all the other candidates combined.

PHOENIX -- A new statewide poll suggests that all of the Republican contenders hoping to unseat Mitt Romney from his front-runner status should not even bother spending their time and money in Arizona.

"If they were spending my money, that's exactly what I'd tell them,' said Jim Haynes, president of the Behavior Research Center. "It's not even close.'

So wide is the disparity that Romney's support is greater than that of all the other candidates combined. And no one of them could defeat the former Massachusetts governor even if that person were able to get all the support of every one of the 25 percent of Republicans surveyed who said earlier this month they had not yet decided who to support.

Haynes said he thinks Romney's support in Arizona is due to the very factors that have placed him on the defensive elsewhere: He has a reputation as being more moderate than others.

"The Arizona electorate is increasingly moving to the center from an overall standpoint,' he said. "As much as anything, it probably reflects that.'

Less of a factor, Haynes said, is Romney being a member of the Church of Jesus Christ of Latter-Day Saints. He said if that drove the numbers, then former Utah Gov. Jon Huntsman would have polled higher than 2 percent.

And, as it turns out, Arizona Republicans who might like Huntsman will not get a chance to express that support.

The Secretary of State's Office refused to accept his candidate papers because they did not contain an original notarized signature. And as of Friday -- a day before the first early ballots were set to be printed -- no lawsuit had been filed to appeal that decision.

Haynes also said that the survey results may reflect a belief by Republicans that they need to pick someone as the candidate, and soon.

"If the object of the Republicans is to put Barack Obama out of the White House, they're going to need to start rallying around somebody instead of slitting each other's throats every day,' he said.

The poll of 553 registered voters shows that, at least in Arizona, Romney may be the GOP's best bet: When paired in test races against the incumbent, only Romney showed enough strength to take Arizona.

Conducted between Jan. 5 and 9, the survey has a margin of error of 7.1 percent looking just at the Republican vote, and 4.3 percent among all voters.

Arizona's presidential primary is set for Feb. 28, with early voting starting Feb. 2. Only Republicans can vote for GOP candidates; the Green Party is the only other one participating in the primary.

If the election were held today, who would you vote for?