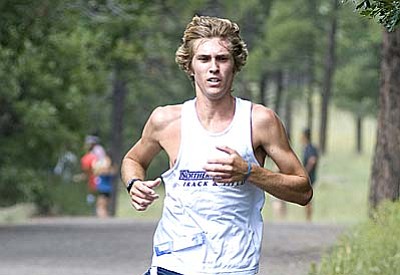 FLAGSTAFF, Ariz. - The Northern Arizona University men's and women's track and field teams is sending 19 athletes to the Big Sky Indoor Championships next month after many stellar performances at the Lumberjack Invitational Saturday.

Twelve men and seven women from the NAU squads ran, jumped, and threw past Big Sky auto-qualifying marks in the season's opening meet at the J.L. Walkup Skydome. The performance is a vast improvement from last year and an early bright spot on a season that is just beginning to shine for the Lumberjacks. Only nine athletes earned conference auto-bids in last season's first indoor meet.

"We came into this meet wanting to get some Big Sky qualifiers out of the way, and I think it was a pretty good start to the season," said Director of Track and Field and Cross Country Eric Heins. "We scheduled our competitions like this so we could come out and compete, then have a couple weeks of solid training to prepare for the next meet."

The Lumberjacks came away with three individual titles at the end of the day, as junior distance runners Tim Freriks of Cottonwood and Rochelle Kanuho swept the 3,000-meter runs for NAU, and sophomore Adel al Nasser took the 400-meter dash crown. Al Nasser qualified for the conference meet with the only time of the day under 48 seconds (47.75). Kanuho's altitude-converted time of 9:58.60@ and Freriks' 8:18.76@ mark were both over 10 seconds faster than the Big Sky indoor standard for the 3,000-meters, and additionally qualified them for the 5,000-meters.

"The race felt pretty good," said Mingus grad Freriks, who took seventh in the 3K and third in the 5K at last year's conference meet. "It's nice to be able to be at home and have the kind of facilities that allow us to have spectators to come and support us."

The home opener proved to be successful for a few newcomers to the Lumberjack squad as well, as freshmen Darriel Banks (7.59) and Shamelle Pless (7.74) practically ran together to dual conference auto-bids in the 60-meter dash. The pair was separated by just 15 hundredths of a second in the final heat on their way to fifth and sixth place finishes, respectively.

Having a teammate with an equal talent level could pay dividends for the Lumberjacks in the coming weeks in more than just the 60-meter dash. Banks and Pless finished less than a half-second apart in the 200-meter dash final as well, en route to a second Big Sky auto-bid for both.

"I'm definitely not used to having a training partner in practice and competition," said Pless, a freshman from Edmonton, Alberta, Canada. "I'm glad I had her in those races, because she definitely pushed me. We feed off each other."

There was hardly an event in which a Lumberjack athlete did not qualify for the conference championships on Saturday. Dennis Givens qualified in his first meet since 2009, running a 48.72 in the 400-meter dash. Jordan Chipangama got a great start on regaining his 800-meter prowess in the Big Sky by running a 1:50.98@ in his first meet back after an injury-filled 2011.

Pascal Tang, NAU's lone thrower to reach the 2011 NCAA Outdoor National Championships, took second in the weight throw with a toss of 58-10 ¼. He was joined by fellow throwers Nicole Elliott (60-0) and Lauren Stuart (55-6) in tossing Big Sky qualifying marks.

The Lumberjack Invitational was the first of six indoor meets on the schedule for NAU in 2012, up three from last season when the Skydome was under a massive renovation project.

NAU has two weeks to get ready for their next competition, the Mountain T's Invitational in Flagstaff on Jan. 27-28.