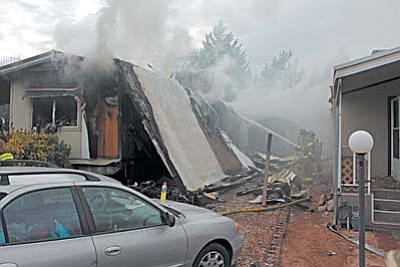 SEDONA -- An early morning fire was reported in the Sunset Mobile Home Park Sunday and destroyed one mobile home near Sunset and Shelby Drives.

Fire Marshal Gary Johnson says the report in about 7:30 in the morning. An older model single-wide mobile home with heavy smoke and flames was visible from the evaporative cooler.

Three people were displaced by the fire and transported to the hospital. The homeowner of the single-wide suffered burns on his feet while fleeing the structure. Two occupants of the double-wide were also treated.

The first mobile was destroyed. A double-wide mobile to the west of the burning home suffered significant damage from exposure. Johnson speculates that mobile can probably be restored.

The fire remains under investigation.