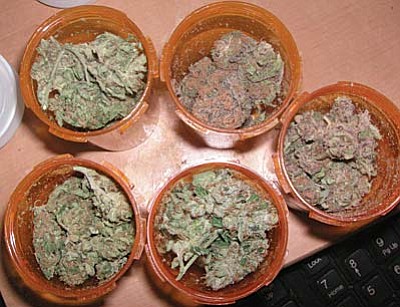 PHOENIX -- A state judge has ordered Gov. Jan Brewer to finally fully implement the 2010 voter-approved Medical Marijuana Act, saying she acted illegally in holding it up.

Maricopa County Superior Court Judge Richard Gama rejected the governor's argument that she has the discretion to delay enactment of parts of the law while she sought a ruling from another court about the liability of state workers under federal drug laws.

"Defendants cite no authority for this proposition, and the court has found none,' Gama wrote in his ruling made public Wednesday.

"The voters intended the Arizona Medical Marijuana Act be implemented within 120 days,' he continued. "This has not been done.'

Gama also ruled that state Health Director Will Humble illegally imposed some rules on who can -- and cannot -- have a license to operate a marijuana dispensary. The judge said nothing in the voter-approved law allows such restrictions.

The ruling removes the last roadblock Brewer has thrown up to licensing dispensaries.

"What Judge Gama said in his order is that she's to implement the act, period,' said Ty Taber. He represents interests that sought to force Brewer to finally comply with the law.

But gubernatorial press aide Matthew Benson said his boss has not yet decided whether to comply, saying she could appeal.

"She's going to have to have an opportunity to review this decision and decide where to go from here,' Benson said.

Taber said, though, she does not have much time, with the law requiring any appeal within 30 days. Absent any action by that time, Taber said Gama's ruling takes effect and the state will have no choice but to start licensing dispensaries.

The ruling is the latest in a string of setbacks for Brewer on the issue of whether Arizonans should be able to purchase and use marijuana for medical purposes.

Brewer opposed the 2010 initiative to allow those with a doctor's recommendation to obtain up to 2 1/2 ounces of marijuana every two weeks to treat a specified list of medical conditions.

It passed anyway. And the health department has processed and approved about 18,000 individual applications since early last year.

The law also required the state to license about 125 non-profit dispensaries where cardholders could legally obtain the drug.

But Brewer blocked health officials from even accepting applications for these after federal prosecutors refused to provide assurances that the employees who handle those applications would not find themselves facing federal charges. And she asked U.S. District Court Judge Susan Bolton to say whether the workers have immunity.

Bolton threw out the lawsuit last month, saying there was no evidence any public employee in any state with a medical marijuana law had ever been prosecuted. Anyway, the judge said it was not in her power to offer immunity to anyone.

Last week Brewer agreed not to pursue that case. The governor said she would allow licensing of dispensaries -- but only after the lawsuit in front of Gama about the legality of Humble's rules was resolved.

Now she has that.

In that part of the ruling, Gama agreed with would-be dispensary operators that some of the restrictions Humble imposed are beyond the authority voters gave him in approving the law.

For example, the judge said there is no legal basis to require that applicants have been an Arizona resident for at least three years.

He also said Humble had no authority to give preference to applicants who never had filed for bankruptcy or to those who are current on child support, are paying their student loans on time and are not delinquent in taxes.

Humble said he believes there are legitimate reasons for the restrictions. But he said no decision has been made whether to challenge that part of Gama's ruling.

In a separate development Wednesday, the House Health Committee voted 7-2 to approve legislation giving Humble the clear authority to report doctors who he believes are violating or abusing the medical marijuana law to state regulatory boards.

Humble said state law requires that before doctors can issue a recommendation for marijuana they must first check a database to see if the patient is currently getting -- and perhaps abusing -- other prescription drugs. He said his staff has found several doctors who have not made those checks.

He also is reviewing the records of a handful of doctors who may not be performing the required thorough review of patients before issuing the recommendations. Humble said he found that eight doctors had issued nearly half of the first 10,000 recommendations.

Rep. Kimberly Yee, R-Phoenix, said HB 2035 would clarify not only Humble's authority to file the reports but also ensure that medical boards could discipline doctors who do not follow procedures.

Rep. Matt Heinz, D-Tucson, voted against the measure, saying it was "unnecessary legislation' given that health officials are already doing just that.