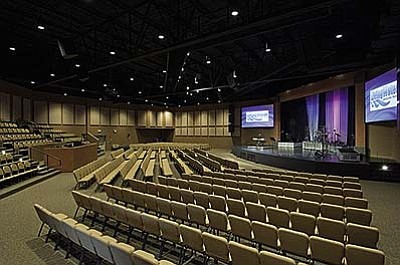 COTTONWOOD -- There have been slow and agonizing “switchbacks” in the long climb to find a permanent home for the Verde Valley Christian Church. The church today has a new home and the future looks bright.

The congregation reaches 430 to 450 members and needs two morning services every Sunday and space for its worship centers to meet its weekly needs. Services are still held at Daniel Bright Elementary School.

But today, there is an extra ray of hope. Its struggle for space has been assured and its excess property has been reduced. The church’s debt load is zero. The congregation is turning a once-prosperous housing truss manufacturing facility that fell vacant during the recession into a new home for worship.

The 52,000-square-foot warehouse of the Phelps Bros. manufacturing on Sixth Street in Cottonwood is double the space that had been proposed for a new church and sanctuary in Clarkdale, said Pastor Jim Hammond. Plus, another 5,000-square-feet of office space is already fully constructed and recently repainted.

The rapidly growing congregation has stumbled to find adequate space after having moved its Sunday services from its traditional church site at Zalesky Road in Bridgeport eight years ago.

By 1995, the church was exploring options for expansion and made a bid on an adjacent 20 acres, but the property was sold to another buyer.

The Property Search Committee examined dozens of properties, including land in Clarkdale, during 2003 and 2004 before entering escrow for 25 acres of the Montezuma Indian School property off Old 279.

While negotiating on numerous tracts without success, VVCC began grading on the Tierra Sienna property at the Montezuma Indian School. At that point in 2006, neighbors became agitated that a church would be constructed in the large-lot residential area.

Attorneys were arrayed on both sides of the question before the county eventually changed the long-standing allowance that permitted churches in residential zones as a matter of right.

The congregation again was looking for land. It listed the Tierra Sienna property. At the same time, the trusses failed in the Zalesky building as that site was being listed.

A deposit was made on the 9.5-acre Clarkdale land on Broadway, east of Tuzigoot Bridge. Significant infrastructure improvements were brought to the site in the intervening years.

Then, just as the board was meeting with its architect, Hammond says, the answer was delivered to the church.

Two brothers in the construction trade already were working on the Clarkdale property. Mark Millar of Northern Arizona Equipment prepared the church land. Paul Millar of Millar Construction attended the meeting of the Board with the architects on planning a permanent church building and offered another solution.

During the following weeks, the plan became clear. The church already owned three properties but still had no adequate facility and acquisition of a fourth property was proposed. They would need to raise $3.5 million just to build a 26,000-square-foot structure on the Clarkdale land. The Millar proposal would cost significantly less.

What the Millars offered was to buy the Phelps Brothers manufacturing plant on Sixth Street, which was now owned by the bank. They would then exchange that 8-acre property and all the improvements for the Tierra Sienna property and the graded Clarkdale property.

At the same time, a plan had been formulated to sell the Zalesky church site to the Vineyard Christian Fellowship congregation, which had already been renting the space.

While there is still work to be done to convert the 50,000-square-foot bare warehouse to usable space for services, classroom, library, gymnasium, event space and bookstore, the exchanges of land and sale of the former church would leave Verde Valley Christian Church needing to raise only $70,000.

When Hammond announced that need, one of the members of the congregation challenged the membership and an offering bucket was passed among them, raising half-again more than that amount in a single day and the congregation gave a vote of confidence.

There is still work to be done, but years of struggle have reached a conclusion, not just for one church but for two.

The 50,000-square-feet of warehouse space will provide for a worship center that will eventually seat 600 people. Hammond believes the church will continue to hold two services with different styles. There will be a 200-seat event room, 12 classrooms, three nurseries, a coffee shop and book store and a gym for basketball and volleyball.

There are two additional buildings on the property. The parking lot, which is completely paved, can accommodate 380 vehicles.

Hammond said, “Sometimes traveling between Point-A and Point-B is not always a straight line.”