Mingus, Cottonwood-Oak Creek move forward on joint services (with video)
Agree to use outside entities to develop agreements 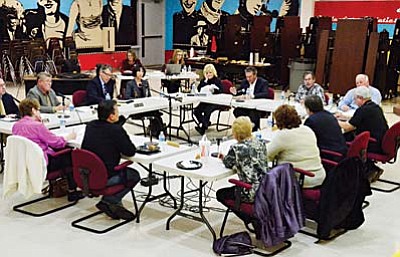 Both boards voted to go into separate executive sessions to begin the meeting. Following the closed sessions, the boards took up the matter of contracting with an outside agency to study joint services and shared employment as well as conduct a review of shared administrative contracts.

James Ledbetter, Mingus board president, explained that Randy Garrison, C-OC board president, had talked with Yavapai County School Superintendent Tim Carter about help selecting and paying for an outside source to conduct the review. After discussion, the MUHS board unanimously passed a motion to approve using Carter's office in that capacity.

Part of that motion calls for the districts to meet again to go over a short list and select which agency will be used.

"I'd say we select independently, and hopefully we make the same selection," said C-OC board member Jason Finger.

MUHS Superintendent Tim Foist told the boards that the Mingus board meets next on Feb. 9. "We can have that on the Feb. 9 agenda," he said.

The C-OC board then passed the same motion and included making a selection from Carter's short list for its next meeting on Feb. 14.

The next agenda item was to direct Mingus Superintendent Tim Foist and C-OC Superintendent Barbara U'Ren to write a draft IGA on joint facilities management and another for additional joint services on transportation.

"The districts would enter into an IGA to pay for shared services," Ledbetter said.

Arcadis is a company that provides consultancy, design, engineering and management services for infrastructure, water, environment and buildings.

The districts would use Arcadis to take a look at what the cost per square foot would be for maintenance of all the campuses involved in a joint services IGA between the district.

"It's not tied to a future contract," Foist said.

MUHS board member Mike Mulcaire asked why two outside studies are necessary.

Ledbetter explained that the study hired through Carter's office will take longer and be in more detail. But the work done by Arcadis on square footage maintenance would be done sooner. He said the districts could begin work on the Arcadis study before the other study was finished.

Garrison added that the focus of the Arcadis study would be entirely on facilities management.

An agenda item was tabled until after the study hired through Carter's office is completed. That item was discussion and possible action for development of a joint/shared district office and a timeline to accomplish it all.

Another item for discussion of contracting with the existing superintendents also was tabled pending the outside study through Carter's office.