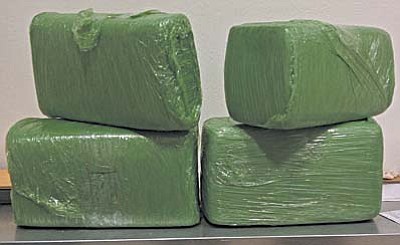 CORDES JUNCTION -- A Yavapai Sheriff's K9 deputy stopped a Peterbilt tractor-trailer that was northbound on Interstate-17 at Cordes Junction last week. The driver and his passenger were eventually booked for transporting marijuana when officers found four bales of the stuff weighing over 100 pounds.

The driver, 37-year old Terrance Blakey, and passenger, 38-year old Kevin Jones, are all from Missouri.

While discussing equipment violations, the deputy became suspicious of the men. It was discovered that their logbooks had been falsified to conceal destinations and timelines.

Both men refused to grant the deputy permission to search the vehicle, but his K9 alerted on the passenger side giving probable cause.

Blakey and Jones were charged with transportation for sales of marijuana and paraphernalia. Both are held on a $75,000 bond.

Current wholesale value of this seizure exceeds $70,000 while the street value would be several times the wholesale dollar amount.

I-17 K-9 Traffic stop results in bales of marijuana
New Yorker, Canadian charged with transporting marijuana on I-17
1,384 pounds of pot confiscated on I-17
Cocaine, heroin seized by YCSO K9 deputies
Nebraska meth and cocaine stopped on Interstate
Event Calendar