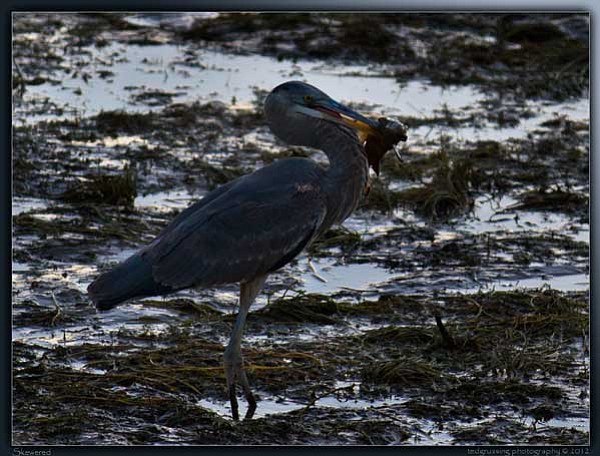 ... at least I think it was a meal for one. Today was one of those "interesting" days and I headed down to the ponds late afternoon to clear the head and reconnect with all things natural. They had drained one of the ponds today, harvesting the fish and readying them for transport to whatever streams and lakes the fish are to be released in. As with all forms of harvesting there was a reasonable number of fish that were not gathered and left in the shallow waters of the pond. This in turn presents a smorgasbord for the herons and others creatures who feast on fish. I continued my walk around the rest of the ponds, but with the deepening shadows good shots were scarce. Coming back to the pond where I started Wayne and I recognized each other (he had been intently studying the pond whilst I walked by) and spent some time visiting. He had been waiting for the herons to come in and begin their harvest, but up until then they had stayed away. While we were talking they began to come in and I got this shot of a young blue heron that had just speared a good sized fish. After this shot he flipped the fish so that it was in line with the throat for swallowing but because of the size of the fish it would not go down. Subsequently he flew to the road around the ponds and continued working on it. Hope he was successful in getting it down.

Roasted a few pounds of coffee in my new cast iron frying pan and get to sample it in a little while. Time for some rest ... hope your day was good and perhaps a little less interesting than ours ... but we are breathing, have a roof over our heads and food to eat. Life is good.