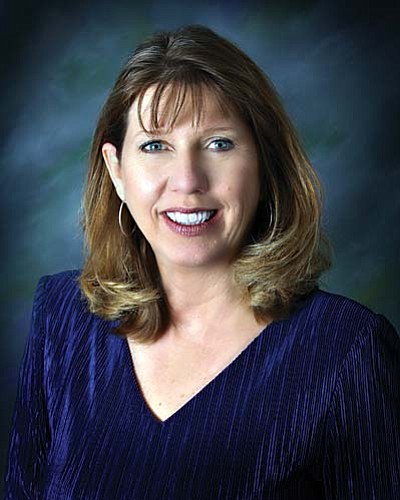 PRESCOTT -- Pam Pearsall is putting the "public" in public service and, as a result, is making a name for herself. That's quite an accomplishment for a county assessor. In many counties, people can't even tell you who the assessor is, and certainly haven't met him or her in person.

But Pearsall, the Yavapai County Assessor, has made it her goal to reach as many taxpayers as possible through dozens of public meetings - and along the way, she's gained visibility as an elected official who's reaching out to constituents.

Pearsall took office in 2009; she has been involved with real estate in Arizona since 1975.

Her section of the county website includes videos explaining how taxation works and why. She's appeared on local radio shows many times, and she distributes flyers reminding property owners of their obligations.

Pearsall, who has a very soft voice because of a childhood vocal cord injury ("When I decided to run for office, everyone assured me they'd rather talk to me than listen to me"), brings her Powerpoint road show to venues around the county in an effort to make the details of property valuation understandable.

Sometimes, she works a little too hard. Wednesday morning, she said, she was suffering from a bad migraine but decided to give her 45-minute talk anyway. She was answering questions when she suddenly fainted.

Undeterred, Pearsall gave another presentation to a crowd of about 50 Wednesday night. That one went off without a hitch.

"If you can endure my presentation and stay awake," she said, "I promise, by the time I'm done, to have given you information that could save you as much as $600 per year on your property taxes."

That's her current crusade. The previous one, which she still points out from time to time, was that, contrary to popular opinion, the County Assessor neither sets nor collect taxes.

The state Legislature, she explained, has changed the way property is taxed, so that the default rate for a residential property has it taxed at a level as though it is not a primary, owner-occupied home, but a rental. That's more expensive, so homeowners who don't act will pay more tax.

"The moral is, when you get something from Pam (in the mail), open it right away," Pearsall said, referring to the notice of the change and an affidavit homeowners must sign to designate their property as owner-occupied.

There's a lesser urgency to the message, because the new law will likely no longer take effect this year, she said, and it's expected to be moved back to February 2013.

But she continues to remind people of the coming change.

A little tougher to explain at the public forum was an increase in assessed value for grazing land, a major issue in rural Yavapai County. The Assessor's Office raised the full cash value of grazing land from $7.56 per acre in the 2011 tax year to $25 per acre in 2012.

In response to an audience question on the issue, she said, "I can't talk about it because there's a lawsuit filed" by about three-dozen ranching families and the Arizona Cattle Growers' Association, naming Pearsall as a defendant.

But she did supply a handout that details the rationale behind the change.

"Properties that had been classified as agricultural grazing land did not have their values updated for several decades in Yavapai County," she wrote. "This caused a disproportionate property tax shift to occur each year on the remaining property owners as other properties increased in value."

"I am endeavoring only to be fair, under the law, by bringing agricultural land values to a realistic value, based on statutory requirements," she concluded.

When the presentation was done and Pearsall had answered questions from the audience, a knot of people gathered around her, some with one-on-one questions, which she patiently answered, while others thanked her for her service and for doing the presentation.

"Well, I made it without fainting this time," she said, smiling.