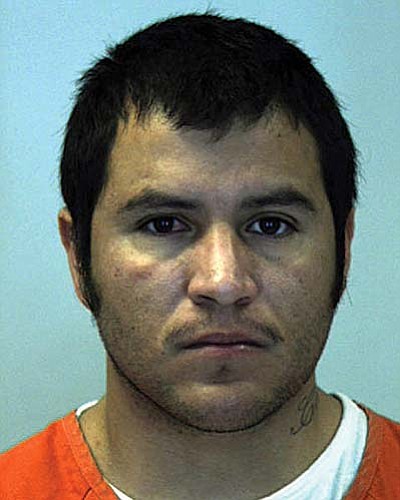 PRESCOTT - The two defense attorneys in the capital murder trial of Cesar Garcia-Soto on Tuesday asked a judge to allow them to quit the case because, they claim, they are required to interview key witnesses in a part of Mexico that the U.S. State Department says is unsafe.

Lead counsel John Napper and his second-chair, Dennis Jones, a Phoenix lawyer, filed a motion with the court claiming that they find it "morally and ethically repugnant to risk innocent lives attempting to conduct a mitigation investigation" in the Mexico state of Chihuahua, which he described as being "in a state of civil war."

Garcia-Soto, now 29, was arrested in February 2008 and charged with first- and second-degree murder and two counts of child abuse in connection with the death of his 3-month-old son in the Village of Oak Creek.

The couple's other two young children were placed in the custody of Child Protective Services.

Rodriguez-Paz pleaded guilty to one count of child abuse in 2008 and was sentenced to one year in prison.

Garcia-Soto's attorney, Napper, argued that, because this is a death-penalty case, he is obligated to undertake "an exhaustive investigation into the history and life of Mr. Garcia-Soto," but the fact that Garcia-Soto is a citizen of Mexico means that would have to take place in Mexico. "The United States State Department has issued a warning asking all American citizens not to travel to the portion of Mexico (Cuidad Juarez in Chihuahua) where Mr. Garcia-Soto was raised," Napper wrote.

Since the defense team cannot travel to Cuidad Juarez to accomplish those interviews, Napper said, he asked the court to preclude the state from seeking the death penalty or to delay the penalty phase of a trial if his client is found guilty, both of which were denied.

He pointed out in his written motion asking to withdraw that some defense teams in capital murder trials are essentially hiring private investigators to go to that part of Mexico, but that Garcia-Soto's defense team "is in agreement that our conscience requires us to refuse" to do that.

If this were not a death-penalty case, Napper said, the issue could be avoided; but Garcia-Soto "obviously wants his life spared and wants to utilize every tool possible to do so," he wrote.

In court Tuesday, Yavapai County Superior Court Judge Celé Hancock said, "I have done a lot of research on this on my own. This is not an isolated issue. It is occurring in Phoenix as well.

"It is my understanding that there are individuals who will travel to these areas to gather mitigation and there are attorneys who don't seem to have a problem (hiring them)," she said.

Noting that Napper said he estimated new counsel could be ready for trial in six months to a year, Hancock said, "My concern with this case is that this is a 2008 case. It is a death penalty case. This case needs to be tried."

Public Defender Dean Trebesch, who said he had originally contracted with Napper and Jones because his office had a conflict of interest which has since been resolved, told Hancock he could try to replace them, but "I have one first-chair (capital-case) qualified attorney in my office."

Trebesch said, "I believe the issue here is larger than simply finding a mitigation specialist to go to Mexico. My concern is what has happened to those interviewed. The greater tragedy is, you go down and do these interviews, and then these individuals (you talked to) end up being kidnapped or killed."

Hancock, struggling with the dilemma, said, "Not knowing who else may be appointed... if I allow Mr. Napper and Mr. Jones to withdraw (I don't know that) we won't have the same problem" with the next lawyers.

"I don't do this," Napper said. "I don't withdraw from cases," he added, pointing out that he had represented other defendants in capital cases previously. "I don't know what else to do," he concluded.

Hancock said, "We may have to try (the case without the interview evidence) and then it will be an appellate issue. That is fine."