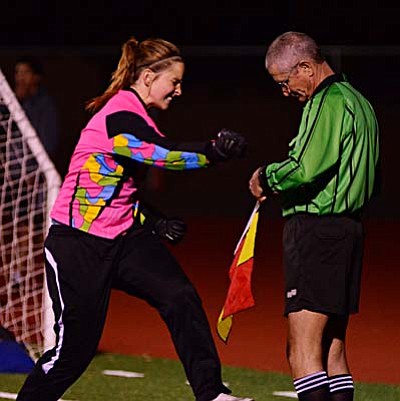 COTTONWOOD - In a game decided by a shootout, the Mingus girls soccer team defeated the visiting Coconino Panthers Thursday night on Bright Field for the last game of the regular season, 2-1.

Mingus senior keeper Taylor Brott blocked two of five penalty shots and every Mingus player who stepped to the spotlight during the shootout put the ball in the net.

The first shootout came Tuesday in Flagstaff against the rival Eagles. Undefeated Flagstaff won that one, handing Mingus their first loss of the season.

Losing in a shootout is heartbreaking, but winning a shootout is equally as sweet. The Mingus win Thursday brought their overall season record to 18-1-2, with a power-point record of 11-1.

Standout senior striker Torey Braly did not play in either of the games between the powerful Flagstaff schools with a sprained knee. Steady defender Alex Pee was also sidelined with injury, but the team hopes to have them back for the postseason.

The rest of the players had to step up in the final two games, and they did. Mingus head coach Buddy Rhodes moved some players around, and the Mingus defense played like they have all season, near impenetrable.

"Our defense is wonderful," said Rhodes. "Missing Alex Pee has been tough, but Ashley Makuch stepped in, and I tell you what, she has played very very well. I can't even begin to tell you how good of a player Anna Guerrero is. She's a coach's player, and anyone who is a coach can see and appreciate what she does. She saved us tonight over and over again. Coconino's striker, Demi Schmieder is college bound also. This was good competition tonight and our defense played great. Lee Canning [Mingus girls JV coach] starts them out young with the same system we use and it pays off."

The stream of talent coming up the ranks for Mingus has kept them playing at a high level for years now. With Braly out, spectators got a glimpse of what the Marauder attack will be like without her next year. Sophomore Gabi Guerrero played where Braly normally does and she scored unassisted in the first half against Coconino.

Gabi Guerrero took countless hits, even a knee to the body, but she kept getting up and giving it her all.

"My coach has been pressuring me a lot since Torey got hurt, and I had to step up and take over the main offensive half of our field. Being in charge pushed me to play hard," said Guerrero. "It was really cool when I scored. Me, Haley Backus, and Dalis Sealey were all up there and everyone just kind of fell on each other and I found the ball when it rolled out."

In a one on one with the keeper, Guerrero sent it in for Mingus' lone goal in regulation. It looked like it would be the only goal of the first half, but Coconino's No. 11 Morgan Kuehl eased one in from short distance in short time to end the first half.

Kuehl left the game earlier in the half with an Asthma attack, but her equalizing goal rewarded her courage to reenter the game.

Kuehl's shot was a tough one to block, but after the game Brott said she got a hand on it and felt like she could have stopped it with a better jump on the ball.

The win Thursday nearly guarantees a first-round home playoff game for the Mingus ladies, but you can never be sure until the playoff bracket comes out. Once the seeding is finalized you'll be able to find the bracket here on verdenews.com. Check back also for playoff soccer coverage.