Marijuana dispensaries to be in business by summer 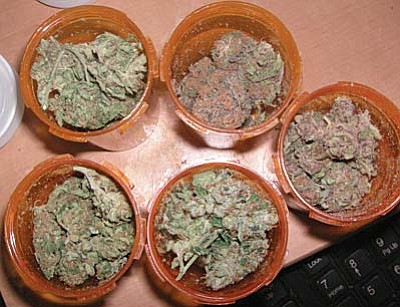 PHOENIX -- The state's first medical marijuana dispensaries could be up, running and selling the drug by mid July.

State Health Director Will Humble announced Tuesday he will not appeal a court ruling invalidating some of the rules he had crafted limiting who can own and operate the shops, including a requirement to be a resident for at least three years. Those rules also gave favorable treatment to applicants who had never declared bankruptcy.

Humble said his next step is to recraft the already enacted rules to account for the judge's ruling. He said even using an expedited process, his agency will now be ready to accept applications "as early as April.'

At that point, said Humble, health officials have 45 days to review the applications to ensure that those who want to run the dispensaries meet the legal requirements that Gama said can take effect. These include having $150,000 in start-up capital and that the applicant have at least a 20 percent financial interest in the dispensary "so you don't have straw applicants.'

The last step, said Humble, is a lottery in cases where more than one applicant wants a state license to operate a dispensary in a specific area. While the law envisions about 125 dispensaries in the state, Humble has set it up to ensure that these are spread out and not all concentrated in a few population centers.

"We'd probably have the lottery around June 15th, which would put dispensaries up and running probably mid-July,' he said -- almost exactly a year after when voters directed they be set up.

"Obviously, we're delighted now that the will of the voters will be carried out,' said Joe Yuhas, lobbyist for the Arizona Medical Marijuana Association. But Yuhas said the delay has been even longer than that.

He pointed out that voters first approved a medical marijuana law in 1996, only to have it overturned by the Legislature. Supporters came back two years later and overrode the legislative action.

But that law never took effect because it required a doctor to actually write a prescription for the drug. No doctor was willing to do that after the U.S. Drug Enforcement Administration threatened to revoke all prescription-writing privileges of any physicians who did that.

The 2010 ballot measure fixed that by having doctors write a "recommendation' that a patient with specific medical needs could benefit from having marijuana. That recommendation entitles the patient to get a card from the state health department entitling them to obtain up to 2 1/2 ounces of marijuana every two weeks.

About 18,000 of these cards already have been issued.

But Humble, under orders from Gov. Jan Brewer, never instituted the second half of the initiative which required him to license up to 125 state-regulated dispensaries.

That came after Dennis Burke, who was the U.S. Attorney for Arizona at the time, refused to provide Humble with written assurances that state workers who process dispensary applications would not be charged with violating federal laws making it a crime to facilitate the sale of marijuana.

A federal judge refused to intercede in that battle. And Gama ruled last week that Brewer's delay was illegal.

In that same ruling, the judge disallowed some of the restrictions Humble had placed on applicants. But that left the door open for Humble to appeal, something he decided Tuesday not to do, ending the last bit of litigation.