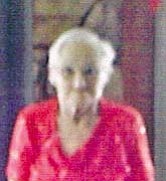 Zella attended Wasta High School. She was in 4-H for a year. She was a housewife and a Baptist and enjoyed crafts, camping, fishing, crochet and needlepoint.

Private family services will be held at a later date.