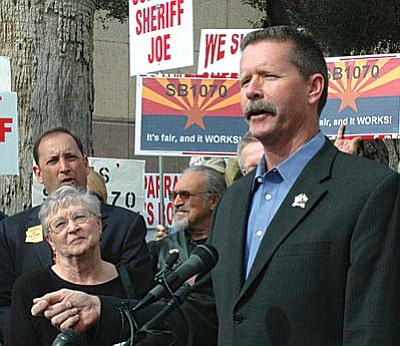 The legislation by Sen. Ron Gould, R-Lake Havasu City, would limit the ability to be armed to those who have a state-issued permit to carry a concealed weapon. PHOTO BY HOWARD FISCHER, Capitol Media Services

PHOENIX -- Hoping to avoid another veto, a state lawmaker on Monday revamped his proposal to let faculty and students carry guns onto college and university campuses.

The legislation by Sen. Ron Gould, R-Lake Havasu City, would limit the ability to be armed to those who have a state-issued permit to carry a concealed weapon. Last year's vetoed bill had no such limit.

And Gould would permit schools to declare specific buildings and classrooms to be gun-free zones.

But that would first require colleges and universities to not only post "no gun' notices but furnish lockers where those who brought their guns onto campus could store them.

Gov. Jan Brewer vetoed similar legislation last year, said the measure lacked definition of where guns would -- and would not -- be allowed on campus. The governor said that lack of clarity would result in lawsuits.

"We don't want the courts to write our gun laws,' Brewer wrote. "That is the job of the Legislature.'

Gould said he worked with the National Rifle Association to address those concerns in what is now SB 1474.

But Anthony Daykin, police chief at the University of Arizona, said this new measure is no better than the one Brewer vetoed. In fact, he said, it not only provides a false sense of security but also creates new burdens for schools.

A Brewer spokesman had no comment on the new measure.

State law allows any adult to carry a concealed weapon. But Gould said there are additional requirements to get a state permit, including a background check. He said that should provide some assurance that only the most responsible would be taking their weapons to class.

Daykin said that might have been true at one point.

"But the way the statute has been gutted over the years, there is no requirement for training,' he said.

For example, Daykin said, someone can get a permit to carry a concealed weapon by completing a hunter safety course. "It never requires you to handle a firearm,' he said.

Gould conceded the point. But he said courses have to teach safe handling of weapons to qualify someone for a concealed weapon permit.

And Daykin said anyone with a certificate saying the person was honorably discharged also would be considered to be entitled to a permit, no matter what that person's experience in handling a weapon and no matter how many years ago the person served in the military.

"These folks just returned from Iraq,' Gould responded. "I guarantee you they know how to shoot.'

Daykin was no more reassured by the ability of schools to ban guns in specific buildings or classrooms because of the mandate for lockers.

First, he said, is the expense of lockers which, in the case of his school, involves more than 100 buildings. But even if that were not the case, Daykin said, there are practical problems.

"It'd be very difficult to monitor lockers at over 100 buildings, which then becomes an issue of security,' he said.

Daykin said it will be obvious that the lockers are for guns "and if the locker is closed and locked there's a gun in there, which makes it a target for theft, especially if it's in unmonitored areas.'